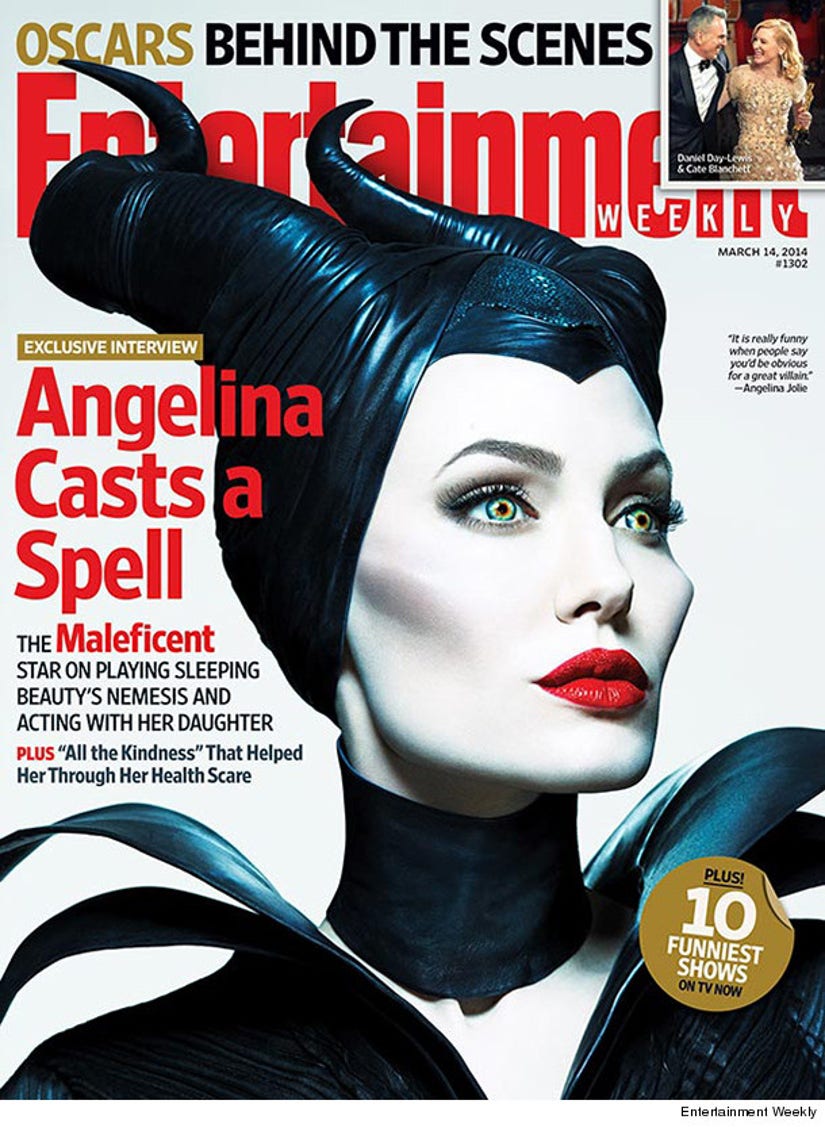 The actress is gracing the cover of the latest issue of "Entertainment Weekly," where she gives her first in-depth interview about her deliciously evil title character, "Maleficent."

"The exercise wasn't how can we have fun with a villain?" Jolie tells the mag. "It was: What turns people evil and vile and aggressive and cruel? What could have possibly happened to her?"

Another member of Jolie's brood makes her big screen debut in the high-anticipated film!

Vivienne Jolie-Pitt, Brad Pitt and Angelina's youngest daughter, plays a young Princess Aurora, with Elle Fanning taking over the role when she grows up.

"We think it's fun for our kids to have cameos and join us on set, but not to be actors. That's not our goal for Brad [Pitt] and I at all," the mother-of-six explains. "But the other 3- and 4-year-old [performers] wouldn't come near me. It had to be a child that liked me and wasn't afraid of my horns and my eyes and my claws. So it had to be Viv."

"When Pax saw me for the first time, he ran away and got upset -- and I thought he was kidding, so I was pretending to chase him until I actually found him crying," Jolie adds. "I had to take off pieces [of the makeup] in front of him to show him it was all fake and not freak out so much."

Besides spilling set secrets, the Oscar-winner also opened up to the magazine about her decision to have a double mastectomy last year.

"Wherever I go, usually I run into women and we talk about health issues, women's issues, breast cancer, ovarian cancer," the 38-year-old explains. "I've talked to men about their daughters' and wives' health. It makes me feel closer to other people who deal with the same things and have either lost their parents or are considering surgeries or wondering about their children. I was very, very moved by all the support and kindness from so many people."

To read more of Angelina's interview, pick up the new issue of EW, on stands Friday, March 7.

Check out the latest trailer for "Maleficent" above, and click "Launch Gallery" below to see more stars who love Disney!