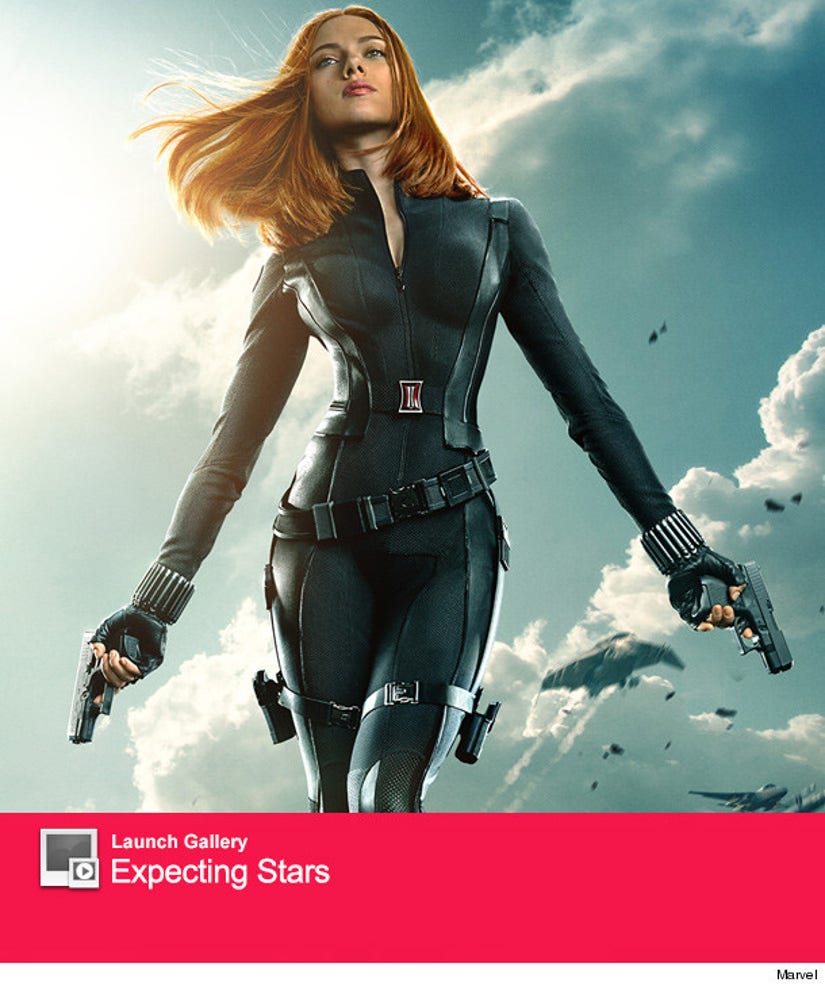 While it's been reported that the actress has a baby on the way, she hasn't said a word about it -- and was very careful today when fielding questions at a "Captain America: The Winter Soldier" press conference.

Though most reporters were respectful of her personal life, two questions alluding to her pregnancy still made it through from a pair of foreign journalists.

"Back in September, you were on TV saying that your grandma called you because she read that you were pregnant and it wasn't true," one reporter started ... before handlers told him to keep the focus on the film.

"But I want to ask about the movie, do you picture both of you guys [Captain America and Black Widow] as a family, raising a little Captain America?" he continued.

"What a strange question," Scarlett responded, generating laughs from the rest of the press. "I like your ability to think on your feet. No!"

"That was a contingency question," added Chris Evans, assuming the film's publicists successfully stopped him from asking what he really wanted to ask. "I don't think that's the dynamic of Cap and Black Widow."

Towards the end of the press conference, a reporter from Argentina also asked about motherhood.

"Many actresses say that the industry changed when they became moms, perhaps not so much action roles, not so femme fatale," he asked -- saying some female stars take less sexy roles after giving birth.

He finished the question by asking, "Do you think it's something that can happen with you?"

"I've been in the industry for 20 years, so the way the roles that have become available to me change as I grow older [laughs]" she said, clearly picking the most vague words possible.

"I'm sure that will continue as I grow older and transition through life. You hope to have a career that has longevity and reflects the experiences that you had I guess," she added. "It's what we all hope for, men and women alike."

The Huffington Post also asked Scarlett about filming of "The Avegners: Age of Ultron" and if her "announcement" will affect her role.

"Everything for 'Avengers 2' -- we're full steam ahead. We start shooting in three weeks and I'm stunt training and we're good to go," she said.

"You know, I think it's something that is [laughing] hard to talk about, exactly. You know, trying to skirt around your question exactly [laughs] -- and, you know, doing a poor job of it. But, you know, like I said, everything is exactly on schedule."

While she was wearing a loose-fitting top and white blazer today, perhaps she'll finally confirm the news for real at the red carpet premiere Thursday evening.