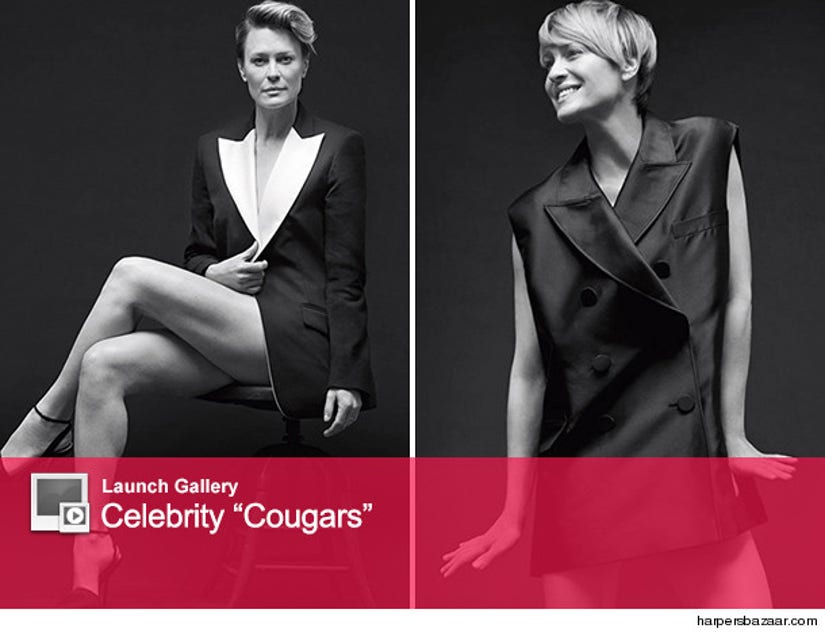 Robin Wright is a woman who knows how to get what she wants!

The "House of Cards" star opens up about being with a younger man and her sexy short 'do in Harper's Bazaar.

Wright gets extremely candid in the interview while chatting with Tom Hanks' wife Rita Wilson. From her love life to her career aspirations -- nothing was left off limits.

When asked about her relationship with Ben Foster, the 47-year-old says she has an issue with society's double standard.

"It's such a shame that society has this fixation because if it was the inverse -- a younger woman with an older man -- not many would bat an eye," she says.

"I think we roll our eyes at older men with younger women and go, 'Oh, he's going through a midlife crisis and he just needs a young hot body.' That's the cliché. But an older woman with a younger man—it's almost judged the way different religions judge doctrines of other religions. It's so intense. And it manipulates people. It's very infectious."

The actress -- who's currently engaged to the 33-year-old "Alpha Dog" star -- started dating Ben shortly after the twosome wrapped production on the 2011 drama "Rampart."

Robin was also married to actor Sean Penn for 14 years before that ... but the high profile pair finally called it quits in 2010 after numerous separations and reconciliations throughout their 20 year relationship. The former flames have two beautiful children together, though: Dylan, 22 and Hopper, 20.

Wright also made headlines recently for her impeccable style, which her daughter Dylan's always trying to steal.

"Dylan has stolen half my closet," she admits. "We do wear the same things. Dylan is so bright and has an amazing ability to write. She understands the arc of a story, and I think she will get into writing, directing, producing, whatever. The acting and modeling thing right now? She's just exploring. She wants to make some money and feel it out. Learning what you don't want is how you know what you do want."

Aside from Robin's great looks on and off of her hit Netflix show, the actress was one of the first stars to rock the pixie cut trend.

"My wardrobe changed dramatically when I cut my hair a couple of years ago. I'd been going back and forth between two different films and had to change my hair color each time, and after that my hair looked like an old spool of cotton, so I chopped it off," she reveals.

"I love it! It's my grown-up haircut. I can't imagine having long hair again," she says. "But the shape of a collar is very different when you have short hair and your neck is exposed. Turtlenecks are good."

We're pretty much obsessed with Wright's short 'do -- and it fits Claire Underwood perfectly!

What do you think about Robin's candid comments? Tell toofab below and check out even more celebrity cougars in the gallery above!

Make sure to check out HarpersBazaar.com for the actress' full interview.