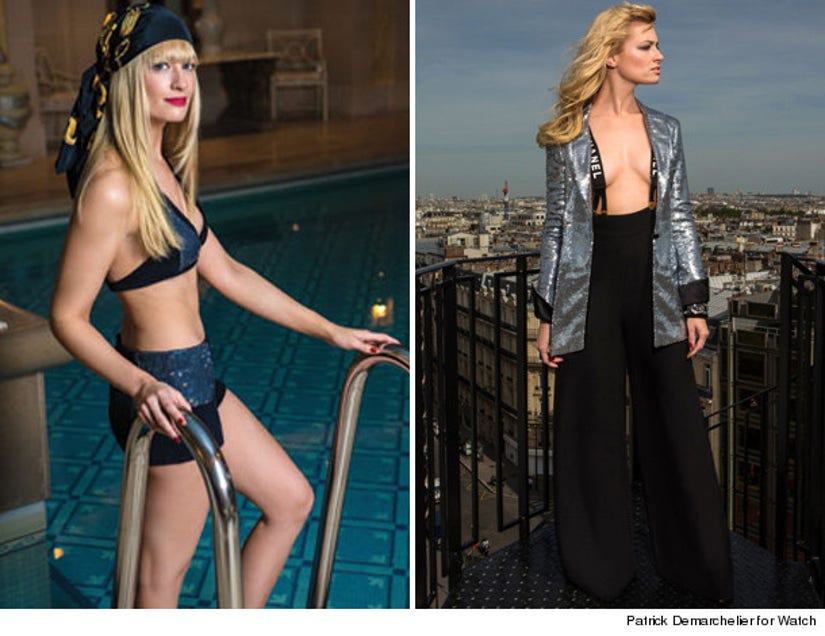 "2 Broke Girls" star Beth Behrs is showing off her sexy side in a racy photo spread for the CBS magazine Watch.

The blonde beauty posed for famed photographer Patrick Demarchelier at the Four Seasons Hotel George V in Paris, France -- and the photos are stunning!

In one snapshot, the 28-year-old actress is rocking a silver sequined blazer over a pair of chic Chanel overalls, with nothing underneath. Her long blonde locks are blowing in the breeze as she looks over the City of Lights.

The UCLA grad tells the magazine about her "Sound of Music" inspiration, being a nanny, working on Broadway and her big break.

When she got the call in 2011 that she had been cast as Caroline in "2 Broke Girls," Behrs was thrilled.

"The process was so drawn out," she recalls. "The last step was making sure I had chemistry with Kat [Dennings], who had been cast way before me. I'd never met her before that morning, and as she was leaving in the elevator, she was like, 'If they don't cast you, call me.' I love that girl. And we need each other -- we work so much, and we're the only ones who understand each other's lives. We're in this together."

"Working with Beth is a dream," Dennings tells the mag of Behrs. "She's the kindest, most fun girl to be around. At this point, we're sisters. I'm sure our real-life chemistry translates."

We love to hear that the on-screen pals are so close outside of work!

What do you think of Beth's sexy shoot? Sound off below!