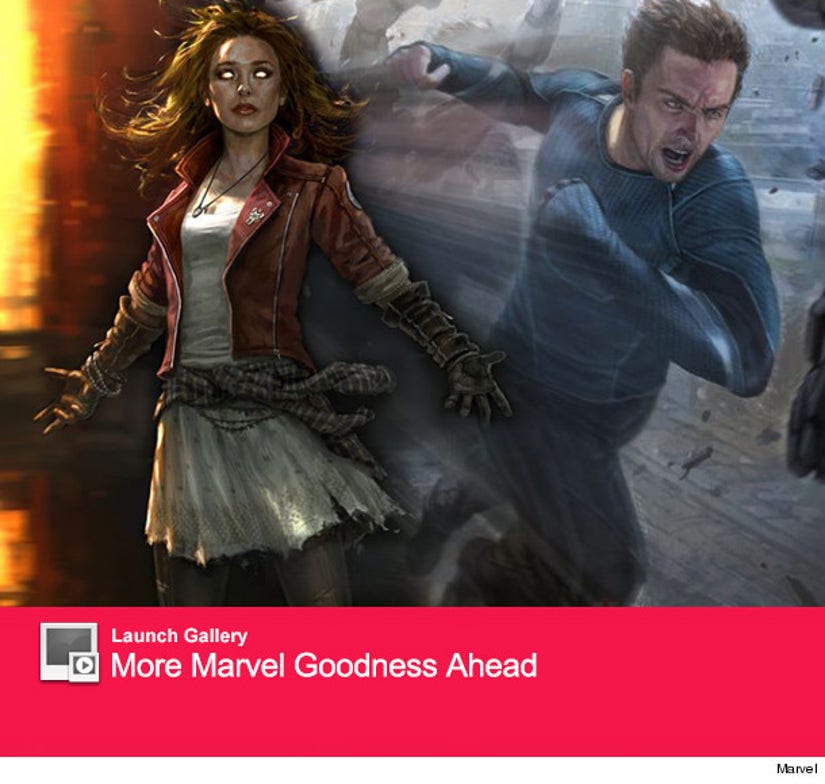 The Marvel Cinematic Universe is expanding ... and last night, the movie studio behind "The Avengers" unveiled a ton of goodies about its upcoming slate.

While ABC's "Marvel Studios: Assembling a Universe" special came across like a giant commercial for the company, it was also full of blink-and-you'll-miss-them sneak peeks at movies like "The Avengers: Age of Ultron," "Guardians of the Galaxy" and "Ant-Man."

Let's start with the one everyone wants to talk about: The "Avengers" sequel.

While no actual footage from the film was shown, we did get some brand new concept art showing what new characters like Scarlet Witch and Quicksilver will look like (above).

The mutant twins will both appear in the flick, though their connection to the X-Men universe will be left out. While they're the offspring of Magneto, Fox owns all the rights to that character, so expect a different origin story this time around.

Elizabeth Olsen will play Scarlet Witch, a powerful sorceress capable of casting spells and manipulating energy. Aaron Taylor-Johnson will play her brother, a superhuman who can move at incredible speeds.

If you see "Captain America: The Winter Soldier" in theaters, be sure to stick around through the credits to see the first video of them from the highly-anticipated sequel. We'll dive into that footage more after opening weekend.

Fans were also treated to some concept art of The Hulk and Black Widow surrounded by destruction ... and a photo of the big green guy facing off against The Hulkbuster, a piece of armor Tony Stark uses to keep Hulk in check. Check that out in the gallery above!

There was also a first look at "Ant-Man," with some footage shown "from" the Phase Three film.

Just expect some things to change before the movie comes out in July 2015.

The video shown was actually from a test film director Edgar Wright first showed at Comic-Con back in 2012, way before Paul Rudd was cast in the title role. But, it does give fans a good idea of what Wright's vision of the costume will look like ... which is pretty cool!

Still want more? Watch the "Guardians of the Galaxy" trailer above and see new concept art from that film in the gallery.

Plus, check out a 4-minute preview of "Captain America: The Winter Soldier" right here: