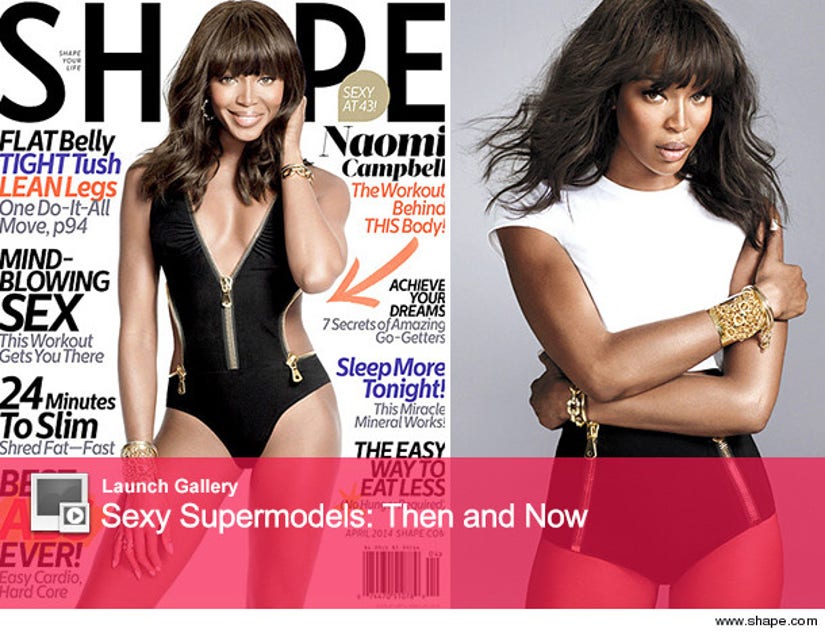 Naomi Campbell's still got it!

The supermodel covers the April issue of Shape magazine, showing off her famous figure in a sexy cut-out swimsuit.

And while she's clearly in shape, the 43-year-old admits she has a hard time keeping healthy when it comes to smoking.

"People told me that cigarettes are harder to quit than alcohol," Campbell tells the mag. "I didn't believe it, but you know what? It is harder."

While the brunette beauty gave up drinking nearly a decade ago, she still struggles to kick cigarettes. Recently, Campbell tried the nicotine patch to curve her cravings, but even talking about her vice is still pretty tough.

"I'm not someone who wants to light up inside people's homes, including my own, and I don't want to stand outside on street corners anymore," Naomi reveals.

Adding, "It's still a struggle. In fact, just talking about it makes me crave one, so let's stop, please! But I am really trying."

Despite smoking, the supermodel tries to stay healthy through a balanced diet and exercise. "I don't believe in starving myself," she says.

"I've never done it, and I never will. I'm even more active when I'm juicing, doing both yoga and Pilates every day."

"The Face" star has come a long ways since she first started modeling as a teen, alongside fashion heavyweights such as Cindy Crawford, Christy Turlington and Claudia Schiffer.

While she eventually found success, Naomi battled discrimination in the industry before hitting it big. "But I learned if you don't accept no for an answer, you often get a yes," she reveals.

Well, all of Campbell's hard work has definitely paid off -- she's looking better than ever! What do you think about the supermodel's confessions?

Tell toofab in the comment section below, and click "Launch Gallery" above to see even more legacy models then and now!

Make sure to pick up the latest issue of Shape magazine for Naomi's full interview.