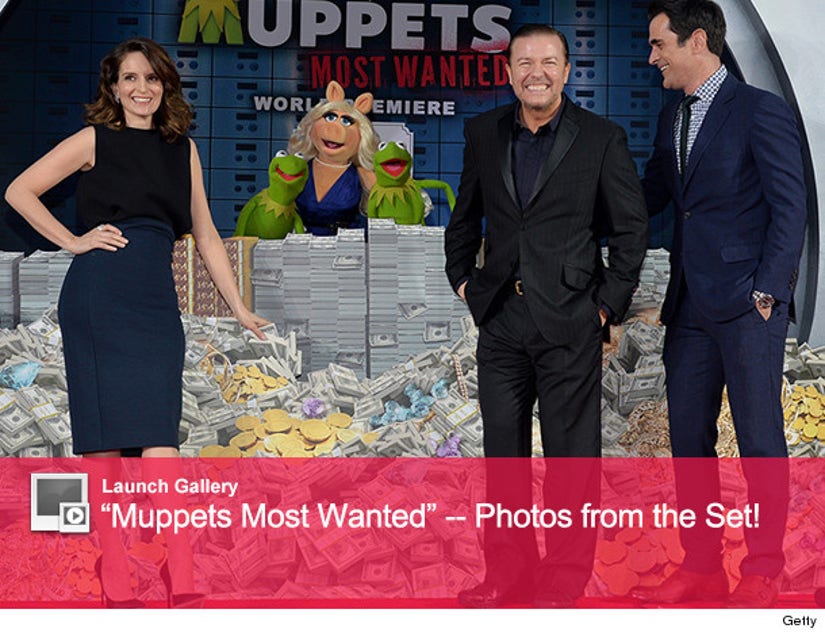 "The Muppets Most Wanted" cast sure know how to bring the laughs!

toofab's Sean Swenson caught up with the stars of the highly anticipated comedy, where the group opened up about working with Celine Dion for the film, showcasing their vocals and the movie's laugh out loud moments.

Of course, we knew Miss Piggy would have something to say about working with the "My Heart Will Go On" singer -- so, how did the muppet feel about the experience?

"Well, working with Celine Dion it was a pleasure. It was a joy for her naturally," she said of their time together.

"Yes, I'm only too happy to let her ride my coat tails up to the Oscar stage. Yes, it was a joy. We only spent a little time together but – but it was very meaningful to her," she added.

We're sure Celine will love to hear this!

But the powerhouse vocalist isn't the only star who sings in the flick -- both Ricky Gervais and Tina Fey show off their skills, too!

"Well, I was okay with singing. I'm a failed pop star. I always sneak a song into everything I do," Gervais said.

"But my dancing is a little awkward. A little embarrassed about that. I don't move well. But I was with a frog, so it doesn't matter. I'll do anything with a frog, that's my motto. And he was great at tap - - or flap dancer," the actor added about his green costar.

Tin Fey, however, wasn't as confidant about her voice.

Fey has one fan though: Kermit! "No, no that's not true, you were great," the friendly frog added.

While chatting about the wide age range "The Muppets Most Wanted" appeals to, the cast agreed that both kids and adults alike will find the movie funny.

"I think [kids] that they're gonna like how funny the movie is because there are a lot of jokes in the movie. Kids who are 8 or 9 or 10 years old, they take a lot of pride in getting the jokes. It makes them feel big," Tina said about the laugh out loud scenes.

"Yeah, it doesn't patronize kids. I remember when I was a kid watching the 'Muppets,' I had older brothers and sisters and they were laughing, and I sort of knew it was cool as well for me. So I think that kids relate to that, they like things that adults like as well," Ricky added.

And "Modern Family" star Ty Burrell also made one hilariously strong point, too.

"I have the IQ of a 7 year old and I loved this movie, I also love juice," he confessed.

Well, it definitely sounds like the cast got along on and off screen (with the exception of Miss Piggy, of course) -- are you excited to see "The Muppets Most Wanted"? Sound off below!