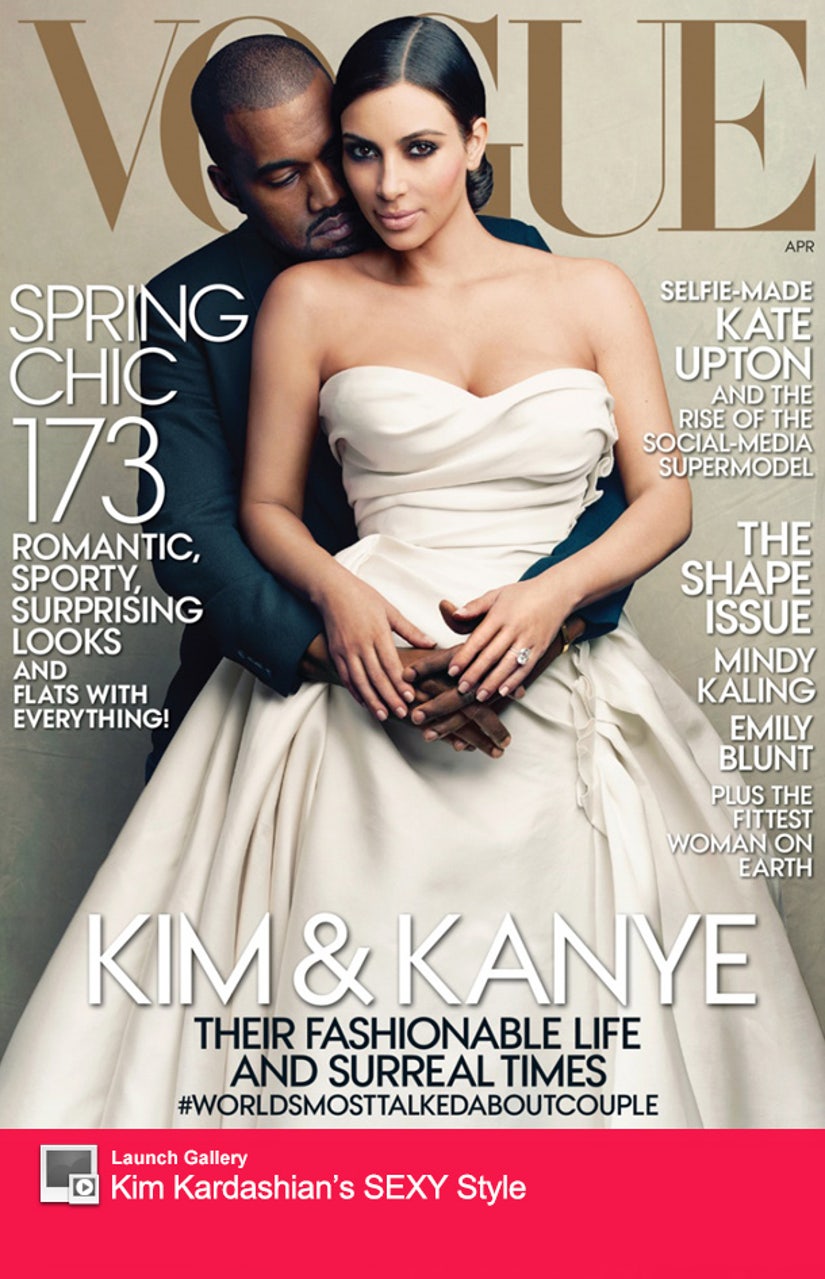 The rumors were true!

Though Kim Kardashian was reportedly considered persona non grata by Anna Wintour and Vogue magazine in the past, here she is on the cover of the magazine's April issue alongside fiance Kanye West.

Wearing a gorgeous white gown reminiscent of a wedding dress, the reality TV star looks stunning on the cover -- sporting dramatic makeup and her hair pulled back. Kanye can be seen holding her from behind in the photo, taken by famed photographer Annie Leibovitz.

The cover reads "Kim & Kanye, Their Fashionable Life and Surreal Times," along with the hashtag "#WORLDSMOSTTALKEDABOUTCOUPLE."

Though they had a rumored feud, Wintour defends her decision to put Kim on the cover in her Editors Letter.

"Part of the pleasure of editing Vogue, one that lies in a long tradition of this magazine, is being able to feature those who define the culture at any given moment, who stir things up, whose presence in the world shapes the way it looks and influences the way we see it," she writes. "I think we can all agree on the fact that that role is currently being played by Kim and Kanye to a T. (Or perhaps that should be to a K?)"

"As for the cover, my opinion is that it is both charming and touching, and it was, I should add, entirely our idea to do it; you may have read that Kanye begged me to put his fiancée on Vogue's cover. He did nothing of the sort," she continues. "The gossip might make better reading, but the simple fact of the matter is that it isn't true."

"There's barely a strand of the modern media that the Kardashian Wests haven't been able to master, and for good reason: Kanye is an amazing performer and cultural provocateur, while Kim, through her strength of character, has created a place for herself in the glare of the world's spotlight, and it takes real guts to do that."

Kim took to Twitter this morning to share the cover image -- and it's clear she's VERY excited about it.

We think she meant "breathe," but the excitement probably got to her.

It looks like the accompanying photo spread will include shots of North West, as she can be seen in behind-the-scenes video from the shoot. Watch the footage over at Vogue's website.

What do you think of Kim's cover? Does she deserve to be honored by one of the world's biggest fashion institutions?

And check out some of Kim's most fashionable moments below -- then tell us what you think in the comments!