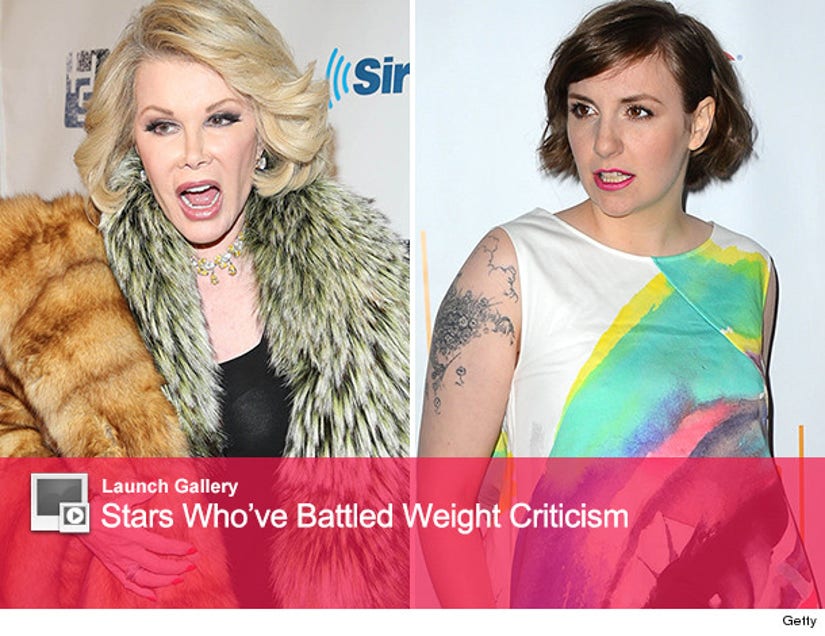 Lena Dunham clearly isn't afraid to show off her body, but does that mean she deserves to be blasted for her weight?

During an interview with Howard Stern this week, Joan Rivers attacked the "Girls" star's weight and style choices.

"How could she wear dresses above the knee?" the 80-year-old asked Stern on his Sirius XM show, to which he responded: "Well, I think the thing we love about her is that she doesn't give a sh*t… She did a whole ('Girls') episode in a bikini. It was the funniest f**king thing I ever saw."

The radio shock jock's co-anchor Robin Quivers chimed in, "And it think that's what she's going for: Just because I don't look like a bikini girl, I want a bikini."

"But that's wrong," Rivers replied. "You're sending a message out to people saying it's OK, stay fat, get diabetes, everybody die. Lose your fingers."

Stern said, "And she makes us laugh." "And I love her for that," Rivers replied.

In the end, the "Fashion Police" host admitted, "I love that she's funny, I love that she did well ... but don't let them laugh at you physically."

"If you look the way you look, Lena, and that's fine and you're funny, don't say it's OK that other girls can look like this," she said, adding with a laugh, "Try to look better."

While Dunham hasn't commented on Rivers' mean comments, Snooki came to her defense on her blog.

"We all know I'll never understand Joan Rivers 'comedy'…I understand when she's trying to be funny, but at the expense of making fun of other people is just so tacky," she wrote. "We get how honest Joan can be but holy s***, have some respect. Half the women in America are Lena's weight and quite healthy. I was there, I was heavier , didn't have diabetes, and felt sexy as a bigger woman. I didn't have health issues and I felt great. Lena is no way, to me, obese to where her health is at risk. LENA I think you're GREAT and I'm sorry we have to deal with Joan Rivers rude and crude commentary. Stay you and stay fabulous."

We have to agree with Snooki on this one!

What do you think of Joan Rivers' crude commentary? Tell toofab in the comment section below, and click "Launch Gallery" above to see more stars who've faced weight criticism.