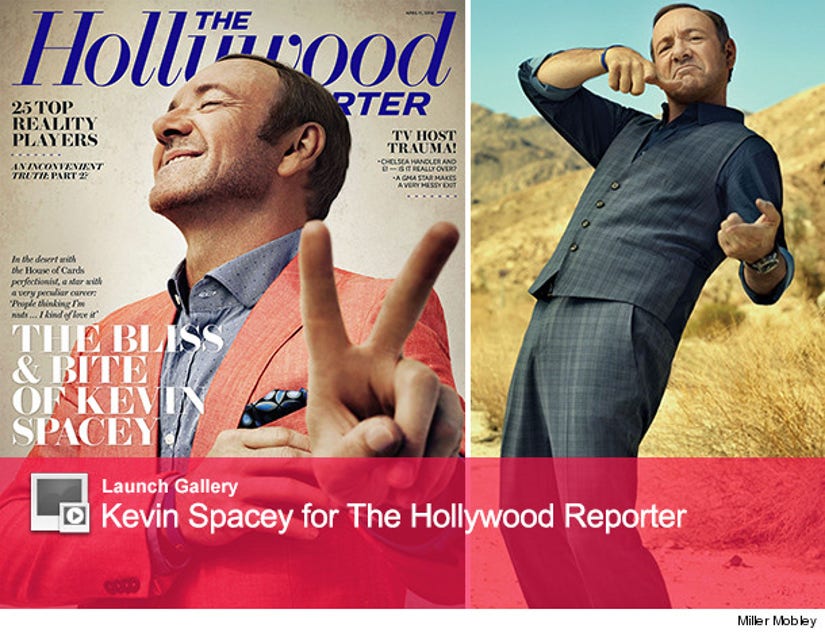 Kevin Spacey really doesn't care what anyone thinks about him!

The "House of Cards" star covers the April issue of the Hollywood Reporter, where he opens up about his career choices and public persona.

But Spacey definitely has the right to be so selective -- he's earned it! Most recently, Kevin was nominated for a SAG Award and in the past he's been up for an Emmy and Golden Globe for playing Frank Underwood in the popular Netflix series.

The actor's known for taking plenty of gambles with his career, but his risks seem to always pay off!

"People thought I was crazy 11 years ago when I moved to London and started a theater company," he explains. "What is he doing? He's out of his mind. People thought we were crazy when we made the Netflix deal for House of Cards. 'They're out of their minds, it'll never work.' I'm used to people thinking I'm nuts. And you know what? I kind of love it."

Part of the reason the Netflix star is so selective with what roles he takes on is because he won't lend his name to just any project -- it's got to be a character that evokes a strong feeling.

"It was absolutely unappealing to me to end up in a lot of movies I shouldn't do, to start showing up and doing the same thing over and over. I was already suffering from, 'He always plays evil guys.' 'He's always the dark character.' People love to box us in, and I wasn't going to be boxed. I decided I was going to f--k with it," he confesses.

While most of Spacey's peers have taken roles just for the hefty paycheck, money isn't his motive either.

"There are a lot of people out there who offer roles to actors because they'll elevate their movie to a place the movie would never reach," he says. "They offer them a s--tload of money for a crap part, but it doesn't make the movie any better. And I'm not interested in elevating someone's crap movie."

Well, we can't blame Kevin -- he's truly an amazing talent! What do you think about Spacey's candid confessions? Tell toofab in the comment section below and click "Launch Gallery" above to see more fun photos from his shoot with the mag!