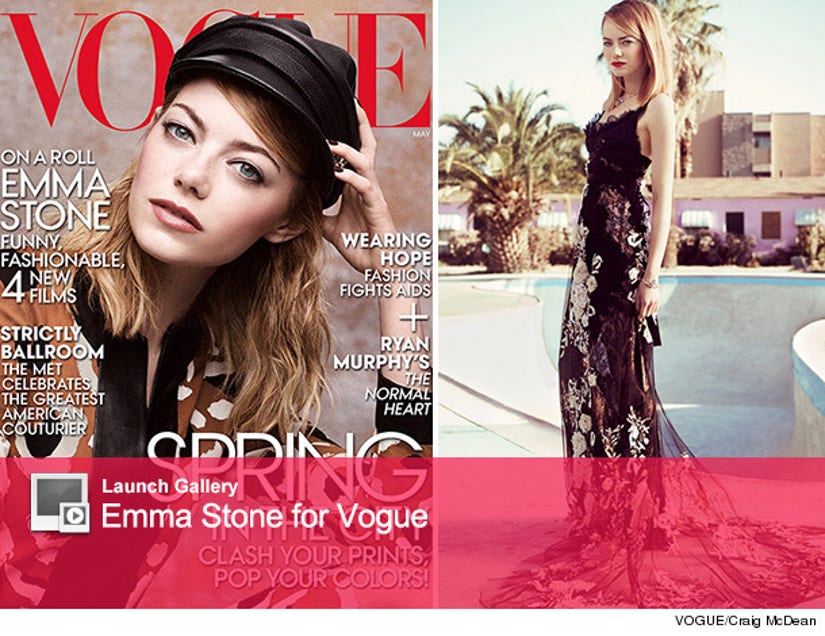 The "Amazing Spider-Man 2" actress covers the May issue of Vogue where she opens up about googling herself, her reality TV past and her costar/boyfriend Andrew Garfield.

While Emma doesn't always like what she reads about herself on the Internet, she does think some of it is pretty amusing.

"I don't usually like what I find… but some of it is really funny," she says.

Stone also opens up about her reality TV past, revealing what she liked about being on the "In Search of The Partridge Family" competition.

"I realized why the people on 'The Bachelor' go so crazy. You go in there rolling your eyes, thinking, 'This is just a reality search competition,' but then you're there for seven weeks, and you just really, really want to win," she says of the experience.

The red-headed beauty also opens up about her starring role in "Easy A."

"It's just too much of me,” she tells the mag. The actress also says she ditched the premiere and went across the street to grab some home fries instead.

And when it comes to her on-screen/off-screen love Andrew, she's sounds super happy.

"I think I've learned a lot by being around him," she reveals. "And, you know, he is an incredibly important person to me… It's been fun working with him just because of who he is as an actor and person. I think it would be fun no matter what."

Well, we think they make the cutest couple -- what do you think of the 25-year-old's candid comments?

Sound off below and click "Launch Gallery" above to see more stunning photos from Emma's shoot with the mag!

Make sure to pick up a copy of Vogue on stands April 29.