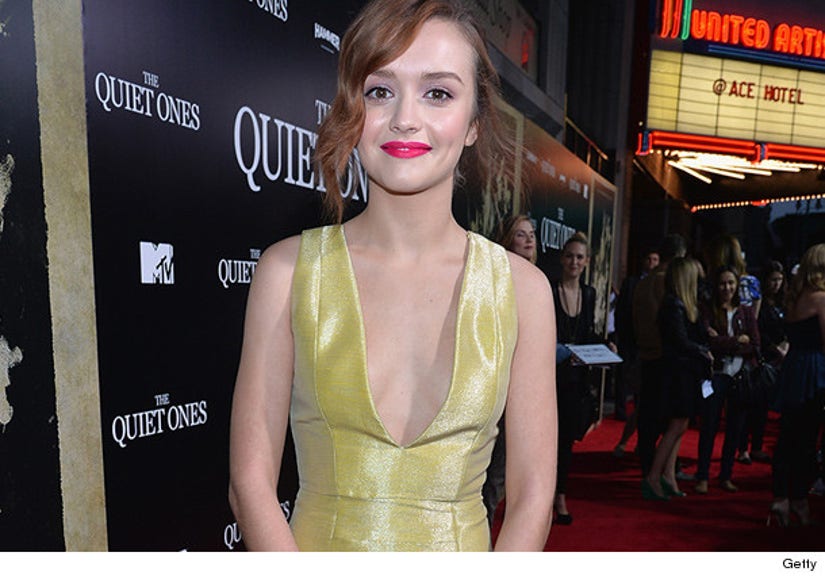 Olivia Cooke is a star on the rise, thanks to roles in "Bates Motel" and this weekend's new horror flick "The Quiet Ones" -- and she's still getting used to all the attention!

"It's crazy, just driving through LA and seeing my face on billboards, that is ridiculous," the actress tells toofab's Brian Particelli. "There's no need for that!"

Cooke, a 20-year-old British import, stars as Jane Harper, a young girl possessed by an evil spirit in her latest film.

"It was surprising how easy it was to tap into that character without preparation," says Olivia. "I wanted to feel like a real person that the audience could relate to and feel for, and then she does a lot of crazy s**t and you're like, 'You're a nutcase, you need to go!'"

And while the flick is full of creepy moments and a fair amount of scares, the mood on the set was anything but sinister.

"It looks creepy, but it's not on set," she says. "We wanted to make it a musical, I was singing 'Moulin Rouge,' Rory [Fleck-Byrne] was doing the Ewan McGregor bit and Sam [Claflin] was singing 'Westside Story.'"

From this role to her work on the "Psycho"-prequel series on A&E and an upcoming Ouija board movie, Cooke is making a name for herself in the horror genre. But she swears it's purely coincidence.

"The role of Jane Harper was a buffet for an actress, so many things in one little character, 'Ouija' is a massive Universal film, I'm the star of it, I'm the heroine, so that was an opportunity I could never ever pass up and 'Bates Motel,' I'm working with Vera Farmiga and Freddie Highmore," she says, explaining her choices.

That being said, she's a huge horror movie fan.

"I love scary movies. The first one I watched was 'The Ring,'" she admits. "I remember I walked in on my friend's brother watching it and for weeks after that, my TV was on a chest of drawers and I'd open the top drawer -- just in case Samara fell out of my TV, she'd fall into the drawer and I'd have time to run!"

And while it looks like she has a lot of gloom and doom in her future with "Bates" and "Ouiji," she has one bright spot in her past: A One Direction tour video!

"Literally, I did it when I was 17. It was my first kind of job before I got a proper acting job," she says of appearing in the "Autumn Term" video.

"It was a one day thing, I auditioned for it and I was with all these amazonian, gorgeous models and thinking "I'm never going to get this,'" says Olivia. "They're like 'Show us your parlor tricks' and I'm like, "When I'm drunk I can do this split.' So I did the split and something popped and I couldn't get back up. He must have loved me and I got the job."

"They were on 'The X Factor' the previous year, but they weren't the big machine they are now," Cooke says of the boys. "We just spent a day with them, it was fun. I got to ride Harry Styles on his back."

There aren't many girls who get to say that!

Check out Olivia this weekend in "The Quiet Ones." "Bates Motel" finishes its second season next Monday on A&E.