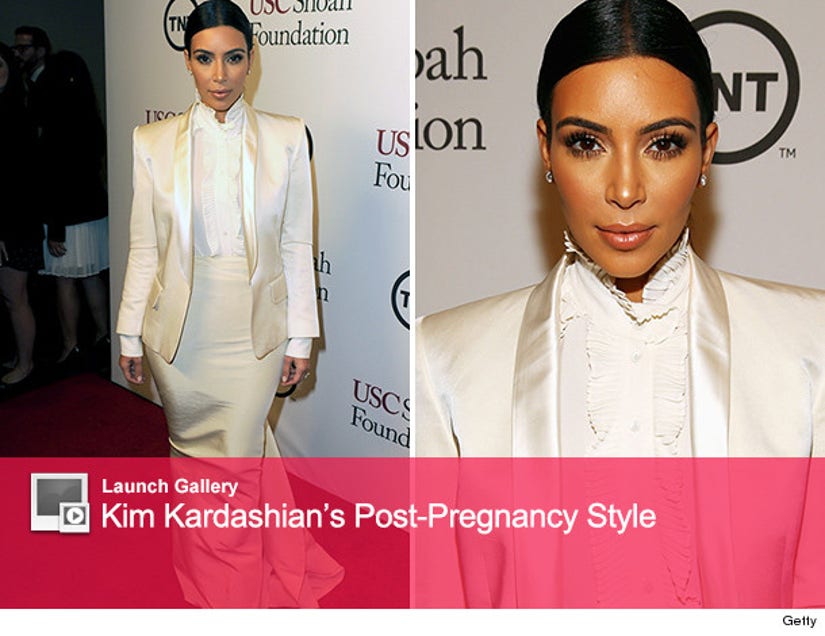 Kim Kardashian is a woman in white!

The brunette beauty wore a white Balmain blazer with satin lapel over a white Alexander McQueen plisse stand-collar blouse, which she paired with a form-fitting Lanvin silk-blend maxi skirt. She pulled her hair back into a sleek ponytail and added a pop of glamour with smokey eye makeup.

The 33-year-old was in the mood to make a statement!

Before she attended the event, Kim went on a Twitter rant to dispel all the rumors surrounding her upcoming wedding to Kanye West. Later in the day, she posted a blog entry on the topic of racism.

In a long blog post called "On My Mind," the reality TV star opened up about how motherhood and being with West has changed her and how she sees the world.

"I feel a responsibility as a mother, a public figure, a human being, to do what I can to make sure that not only my child, but all children, don't have to grow up in a world where they are judged by the color of their skin, or their gender, or their sexual orientation," she wrote. "I want my daughter growing up in a world where love for one another is the most important thing. So the first step I'm taking is to stop pretending like this isn't my issue or my problem, because it is, it's everyone's..."

We love that she's taking a stand!

What do you think of her blog post? Tell toofab in the comment section below, and click "Launch Gallery" above to see more of her post-pregnancy style.