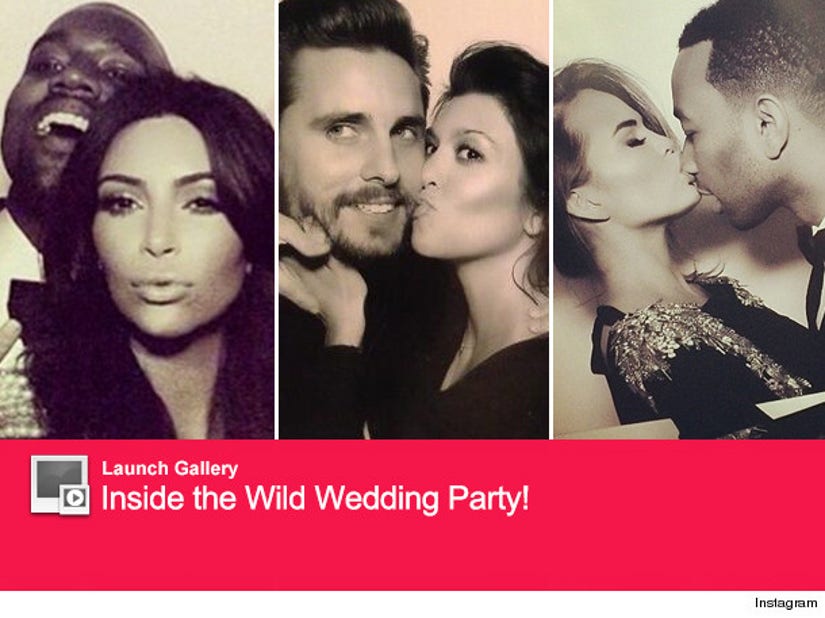 Kim Kardashian and Kanye West's reception was one swanky affair.

The two got married on Saturday at Fort Belvedere in Florence, Italy -- and celebrated with one wild after party following the gorgeous ceremony.

PHOTOS: See How This Wedding Compares to One w/ Kris Humphries!

Guests were seated at a 224-foot marble table, with their names engraved in gold at their seats. The giant table offered stunning views of the Florence skyline as guests reportedly feasted on chicken, steak, salmon, tortellini and a ton of champagne. We're told the food was even dusted in gold flakes -- how fancy, right?

And John Legend, who attended the celebration with wife Chrissy Teigen, performed his hit "All of Me" for the crowd -- reportedly telling Kim "Kanye was was inspired by you, knew he was in love with you, knew you were the one."

But that wasn't the first dance -- Legend also kicked things off by singing Etta James' "At Last."

While everyone attending had to sign confidentiality agreements and apparently hand over their cell phones, guests all started sharing pictures from the photo booth after the party ended. Check out all the pictures in the gallery above -- including shots of Kim and Kanye, Kendall Jenner, Kris Jenner, Joe Francis and even Jaden Smith.

The entire event was organized by party planner Sharon Stacks, who also did Kim's wedding to Kris Humphries. Hopefully this one lasts a little bit longer than 72 days!

Want more Kardashian wedding goodness? Click here for all the latest updates -- including a message from Beyonce, a joke from Brody Jenner and pics from the epic rehearsal dinner.