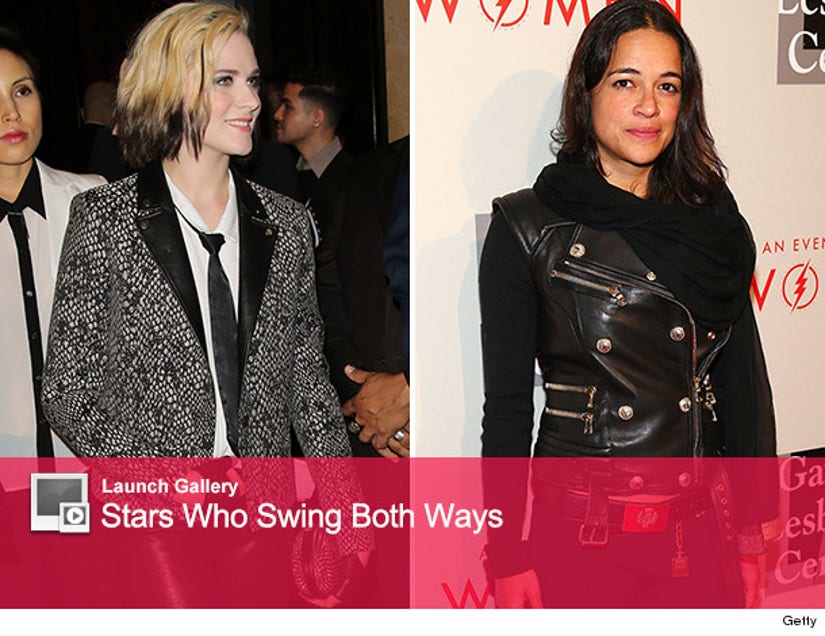 Evan Rachel Wood may be a bisexual, but that doesn't mean a woman broke up her marriage to Jamie Bell.

The actress took a break from her Twitter break to come out swinging against rumors she hooked up with Michelle Rodriguez after The L.A. Gay & Lesbian Center's "Night of Women" event earlier this month, an event they both attended (photos above).

-- I have never even said "hello" to Michelle Rodriguez. I think its convenient someone chose to make up the story now and not that night.

If "a source" saw us leave together, why am I seen here leaving alone? https://t.co/jEzz0Q8EZk

This is "journalism" at its lowest. Complete lies made up to exploit a public separation, as if that isnt hard enough. Disgusting.

Also just because you are in a photo with someone doesnt mean you spoke or slept together. Really guys?

After her little rant, Wood then said she was going back to her Twitter "break."

The rumors come just days after she announced her split from husband of two years and baby daddy, with the two releasing a joint statement on Wednesday.

"Evan Rachel Wood and Jamie Bell have decided to separate," a rep tells toofab. "They both love and respect one another and will of course remain committed to co-parenting their son. This is a mutual decision and the two remain close friends."

The two recently renewed their vows in April and welcomed a baby boy together last July.