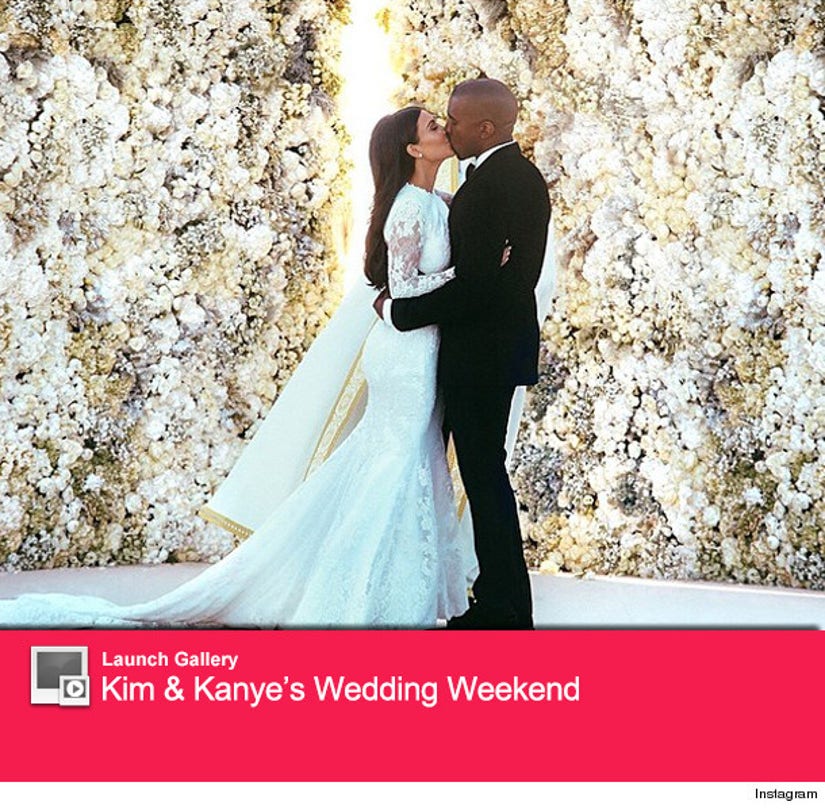 Kanye West might want to think before he speaks!

The rapper attended the Cannes Lions Creativity Conference on Tuesday, where he talked about wife Kim Kardashian and technology.

Talking about the high-profile pair's wedding photo (which was the most liked picture on Instagram, ever), the "Gold Digger" singer said that it took them days to perfect the image ... because famed Vogue photographer Annie Leibovitz backed out of shooting their wedding the day before the ceremony.

"Let me tell you something about that kiss photo that my girl put up … this was pissing my girl off during the honeymoon, she was exhausted because we worked on the photo so much because Annie Leibovitz pulled out right before the wedding. I think that she was, like, scared of the idea of celebrity," he said at the conference.

"Because Annie pulled out, I was like, 'Okay, I still want my wedding photos to look like Annie Leibovitz,' and we sat there and worked on that photo for, like, four days because the flowers were off-color," he added.

This probably wasn't the smartest thing for the rapper to say, considering it allegedly took a lot of pleading with Vogue editor-in-chief Anna Wintour to get the reality star in the coveted magazine in the first place.

But the father-of-one's rants didn't stop there, West also went on to diss Alicia Keys, Samsung and the Internet as a whole.

Check out a few of Kanye's best quotes from the conference below!

"The reason I said I didn't like Samsung is because throughout my entire life … I have to work with the No. 1, I can't work with anyone but Jay Z, I can't be with any girl but Kim because that's the girl that I look at her pictures the most and get turned on the most. I am not going to represent any company except Louis Vuitton because that's the best."

"The only way I can be an inspiration is, I get bashed so much but create so much."

"You know what the difference between a vision and a hallucination is? They call it a vision when other people can see it."

"Alicia Keys is not the right fit to be the creative director for BlackBerry, obviously that was BlackBerry trying a last-ditch attempt to see what celebrity they could get to do something … she was set up to fail."

"I think bad taste is vulgar — it's like cursing. I believe the world can be saved by design because, what is the most vulgar thing someone could do? Kill someone, so good taste is the opposite of that."

﻿"The world as a whole is f—g ugly, and the Internet is f—g ugly. But I am not in the construction business."

"We have to remember Rome wasn't built in one day. But the Internet is the new Rome."

What do you think about Kanye's "words of wisdom"? Tell toofab in the comment section below and check out even more pictures from Kim and Kanye's wedding in the gallery above!