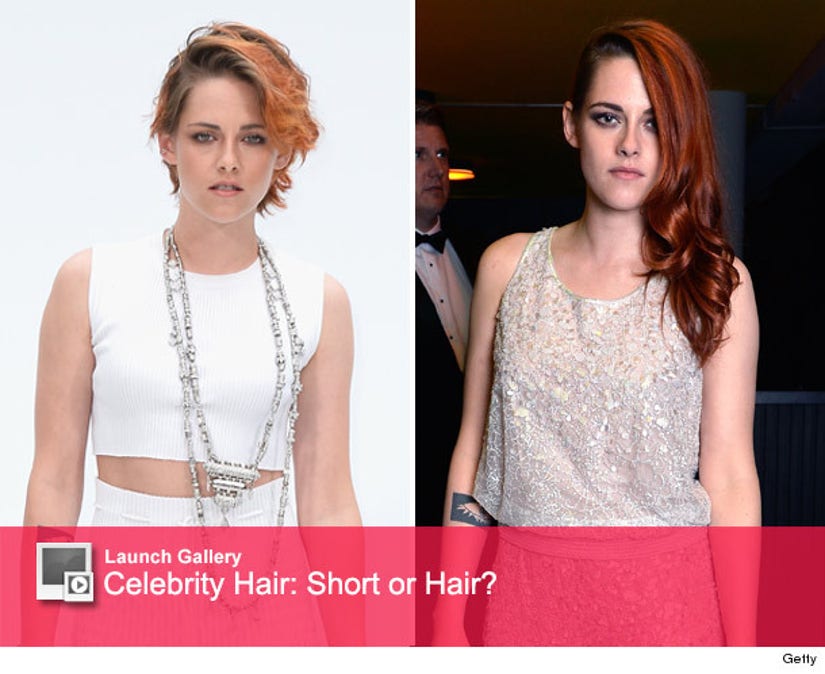 Kristen Stewart has a chic new 'do!

The actress seems to be growing out her orange hair, which she dyed for her role in Nima Nourizadeh's "American Ultra," due out next year. Her new look stood out against her all-white outfit and simple makeup.

In a Q&A with Grazia, Stewart praised Karl Lagerfeld, the label's head designer and creative director. "The only intimidating thing about him really is that scary unapproachable façade, which is something people project onto him, I think," she said. "Because when you meet him or you have the opportunity to watch him work, or in my case 'work with him,' he is so awesome. And you can really reap the benefits of being around someone who knows so much and is so creative and driven and excited."

The actress tries to experience each Chanel show "with all of my senses."

"It's about the music, the feeling in the room," she revealed. "Everything about a show is supposed to evoke a feeling and not all of them do. Sometimes it's just about the clothes, and when you see a show that tells a story and has a setting and it has a context, it's like watching a film. And so to be around that energy, that's what I look for in my job...When you go to a good show, it's like you are watching history. It's like you are watching something that is like lightning a bottle—you know they hit something," she added. "I've been to two of the shows and each time it was a full experience. It wasn't about the clothes or picking out what dresses you liked—it's about watching it as a whole, watching the story unfold."

Stewart has transformed into a true fashion maven!

Do you like her hair better short or long? Cast your vote.