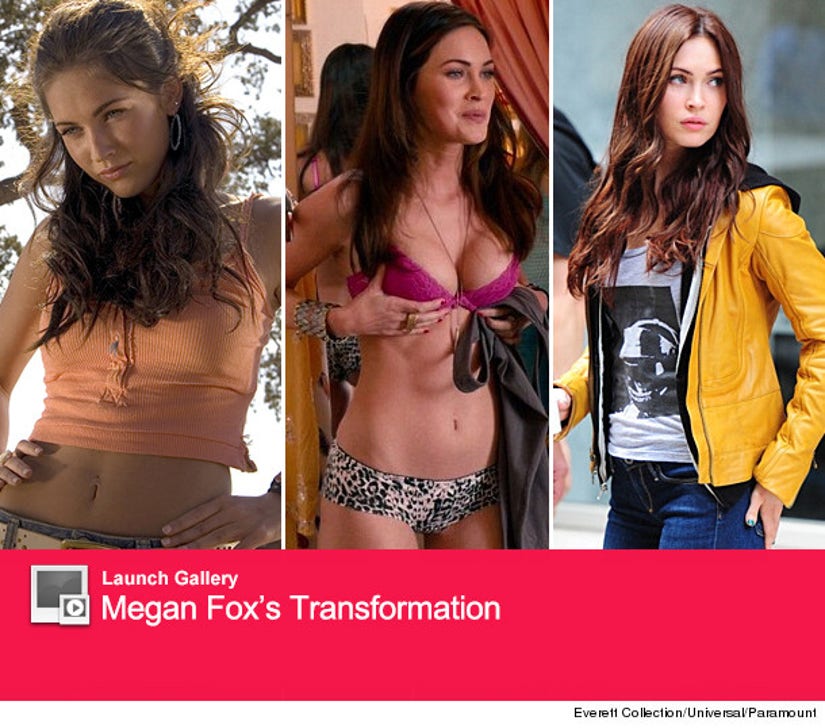 Megan Fox's role as April O'Neil in "Teenage Mutant Ninja Turtles" marks a definite shift in her career trajectory -- it's her first major role where she doesn't bare her midriff.

After her work as Mikaela in the first two "Transformers" films, Michael Bay fans got to know her impressive physique pretty well. And with roles in "Jennifer's Body," "Jonah Hex" and "This Is 40" also cashing in on her sex appeal, many started to suspect April might get a risque makeover once Megan was attached the to film.

Well, we've seen it and, thankfully, that's not the case.

While the character does get a modern update (who in their right mind would wear a yellow jump suit these days?) it's the most covered up Megan's ever been, allowing the audience to focus on her character ... and not her cleavage.

"I don't mind doing that stuff, I think that's been a part of being an actress in Hollywood since the beginning," Fox tells toofab of her past roles. "I don't feel ashamed or like I can't be taken seriously while also wearing a tank top. If you don't take me seriously when I'm wearing a tank top, that's your f**king problem."

It's precisely that take-no-prisoners attitude that we love so much about the feisty Fox, who campaigned hard for the role of April.

"I was attracted to this because I was a fan as a kid and I really wanted to do this," she says. "It was Valentine's Day and I went in [to meet with director Jonathan Liebesman] and we were in there for five hours at Paramount for my first meeting. Brian [husband Brian Austin Green] is texting me like 'It's Valentine's Day, where are you?' and I got home and sent everyone an e-mail saying 'You know what, it's O.K. if you don't cast me, I understand. I just want you to know that I'm going to be in the audience regardless.'"

During a press conference for the film on Friday, Liebesman opened up about initially meeting Megan and revealed why he decided to throw those preconceived ideas about her out the door.

"Megan's obviously incredibly sexy, [but] that to me is not what Megan is about," he says. "When I met Megan and got to know her, what comes across to me is someone who is much smarter than people give her credit for and that there is literally more to her than meets the eye."

Yep, he made a "Transformers" joke.

"That's what I wanted to put into April O'Neil," he continued. "I wasn't interested in sexualizing her. I wasn't trying to service fans who look at Megan's Maxim pictures, I was servicing fans who loved 'Ninja Turtles.'"

And while there has been some backlash from avid fans of the original cartoon and 1990 film, Fox isn't phased.

"Let me tell you something about those people," she says. "How much money did 'Transformers 4' make? Exactly, those people can complain ... but they're gonna love it and if they don't love it, they can f**k off."