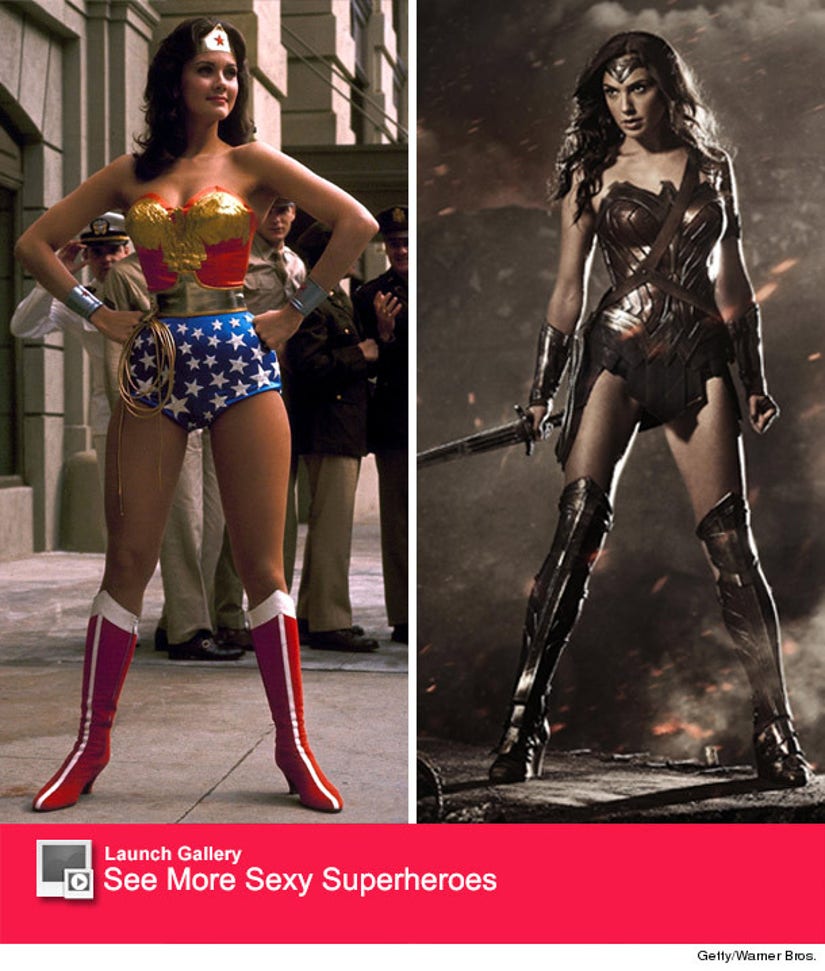 Lynda Carter is known for wearing one of the most famous costumes in television history -- but this week, she's returning to the tube to judge a group of people wearing almost nothing at all.

Wonder Woman herself is the guest judge for a superhero-themed challenge this week on "Skin Wars," GSN's new reality show pitting the best body artists in the country against each other for a $100,000 prize.

toofab's Brian Particelli talked to the legendary actress about her experience on the show and Wonder Woman's makeover in the upcoming "Batman v. Superman: Dawn of Justice."

So Lynda, what brings you to "Skin Wars"? Is it safe to assume superheroes are involved?

They asked me if it was O.K. [to have her judge a comic-themed challenge] and I said that's fine. I would have done it without that! It was really about the talent of these people. And [show judge] RuPaul is such a cool guy, I've known him for so many years. I did "Drag Race," and I loved it. It was a chance to work with him and be a part of this great art form that people do. It's amazing and crazy.

Were you familiar with the world of body painting before "Skin Wars"?

Yes! There's a guy that I actually recommended to be on their show [next season] because he's so talented and such a good guy.

So, how did the contestants do?

I think they did some beautiful work. It was very difficult to judge, but there's a lot more intrigue that goes on behind the scenes. You get a group of talented people in a room and there's bound to be some drama. Reality shows, they thrive on drama.

Were you a part of it?

[Laughs] I'm not involved in the drama.

How difficult is it when it comes time for eliminations?

It's very difficult. It's really hard, because [you're judging] more than the work itself. You can't distance yourself from the work and the personalities, it's the hardest thing to do. You may really like the personality of the artist but the work isn't as good. He or she didn't come through as well as you wanted them to. But other than that, it's a blast to do.

They'll have to pay me a lot more. I'm joking!

After "Drag Race" and now "Skin Wars," are you and Ru close?

We've been good buddies for quite a while and he's so talented. It's always astonishing how he can look like any other guy ... but when he puts all his gear on, holy cow, he can look really good.

Now I've seen you and Gal Gadot communicating on Twitter over the ALS Ice Bucket Challenge -- what do you think of her new Wonder Woman costume?

This is an artistic vision the director has and I wish them well in it. I think she looks great.

I just hope they don't make her too masculine. There are so many wonderful things about women. If any woman really was a superhero, she would also be imbued with fairness and a sense of life equilibrium. I hope they have included a richness in the character.

Will we see a cameo from you at all in "Batman v. Superman: Dawn of Justice"?

No, but I'll be the first in line!

Check out Lynda on "Skin Wars," Wednesday night on GSN. She'll also be performing at Lincoln Center in October.

Also watch the video below to see how some of the stars at Comic-Con reacted to the new Wonder Woman costume. They weren't all as kind as Lynda.