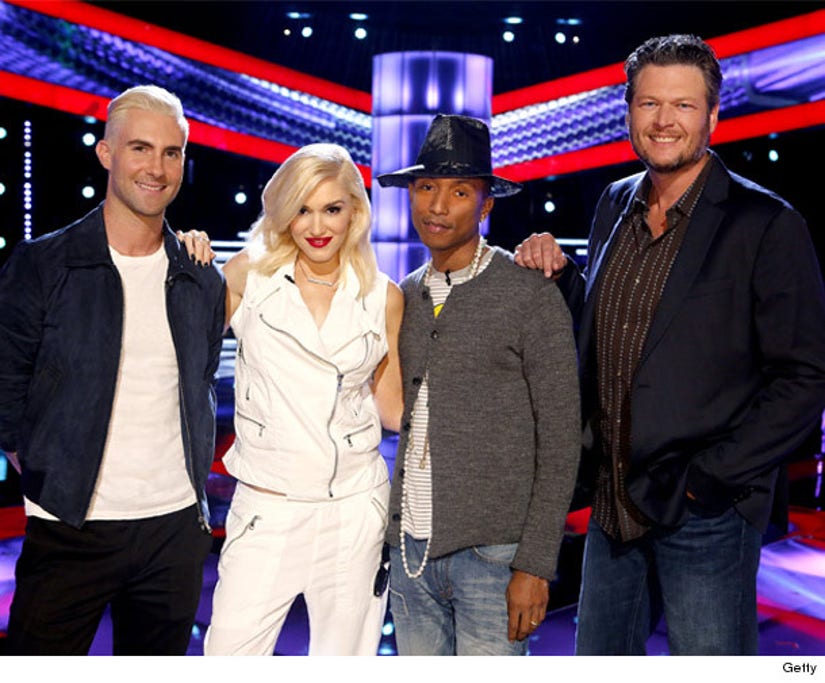 "The Voice" is shaking up the group dynamic ... again!

toofab's Brittany Kyles sat down with Adam Levine, Blake Shelton and newbies Gwen Stefani and Pharrell Williams at a press junket for the new season.

When it came to signing onto the singing series, the No Doubt frontwoman says that it was really a last minute decision.

"Like it was so quick and spontaneous, and I think that's what's been the best part about it and there was no -- I didn't know that I was going to be sitting inside of a black and red spaceship for the next three months. Really cool," the "Spiderweb" singer explained of her new gig.

But Blake and Adam -- who have both won "The Voice" -- said they're not too worried about their new competition. In fact, it seems like the entire panel of coaches are tighter than they have ever been before.

"I never like to operate out of fear," the "Maps" singer explained. "I wasn't scared. I was excited. I was like, yeah, awesome. Amazing. Blake and I have been so lucky. And you just never know what the chemistry is going to be like when people come in. It's been really great. It's been amazing, and it didn't have to be that way, but it was."

While Pharrell said the competition between the coaches has been friendly, Gwen's found some of it to be "offensive" -- especially when it comes to Adam's sense of humor.

"He's offensive to me sometimes. He is so inappropriate, and I have been in a band for my whole life, and I know inappropriate. He's just to another level," Stefani said.

The blonde beauty also revealed that this is the first time she will be musically collaborating with hubby Gavin Rossdale, who Gwen will be bringing on to help mentor her team.

"I have to tell you I went back and forth about having Gavin on because we have only collaborated on babies before," she hilariously confessed. "I just didn't know -- you know, you play different roles for different people in your life, and I'm his wife, so it was weird, but it was awesome. And it was really, really fun to do that with him, and the whole process is just so inspiring for me," she added.

As the only female on the show, the pop star says she doesn't mind -- she's used to it. "I love being with these guys. Adam has raised the bar for me. He has gone places that my band hasn't gone," she told us.

"She's talking about how perverted and disgusting I am," Adam chimed in.

VIDEOS: Christina Aguilera Discusses Her Departure from "The Voice"!

"Yeah, he's bad. And, you know, whatever version of this show you see at home on T.V., I get the X-rated version, and it's hilarious. I mean, these guys are off the chart. It's so funny," Gwen revealed.

Now, we'd love to see that version of the show -- we can only imagine what those guys talk about off-camera!

"Well, first of all, Shark Week is a huge deal for me. But a show called 'Naked and Afraid' -- holy cow. Wow, that show is so epic," Adam exclaimed.

"I do have one guilty pleasure while I'm doing my makeup in the background, I love 'Say Yes to the Dress,'" Gwen confessed. "It's such a dumb show, and I love it."

"You'll probably think I'm joking, 'Saved by the Bell,'" Blake confessed. "It's not even on anymore!," Adam snapped back.

PHOTOS: Miranda Lambert Shows Off Her Sexy Side in "Platinum" Album Art!

"It's on all the time. It's like 'Dumb and Dumber.' Every time you're scanning through, no matter when or how many times you have seen it you stop and watch it. And I'm waiting for something to happen on 'The Leftovers' and nothing is happening," the "Honey Bee" singer added.

"What do they have in theaters over there where you live? Like 'Toy Story 1'?," the Maroon 5 frontman joked.

Season 7 of "The Voice" when it premieres on NBC September 22!