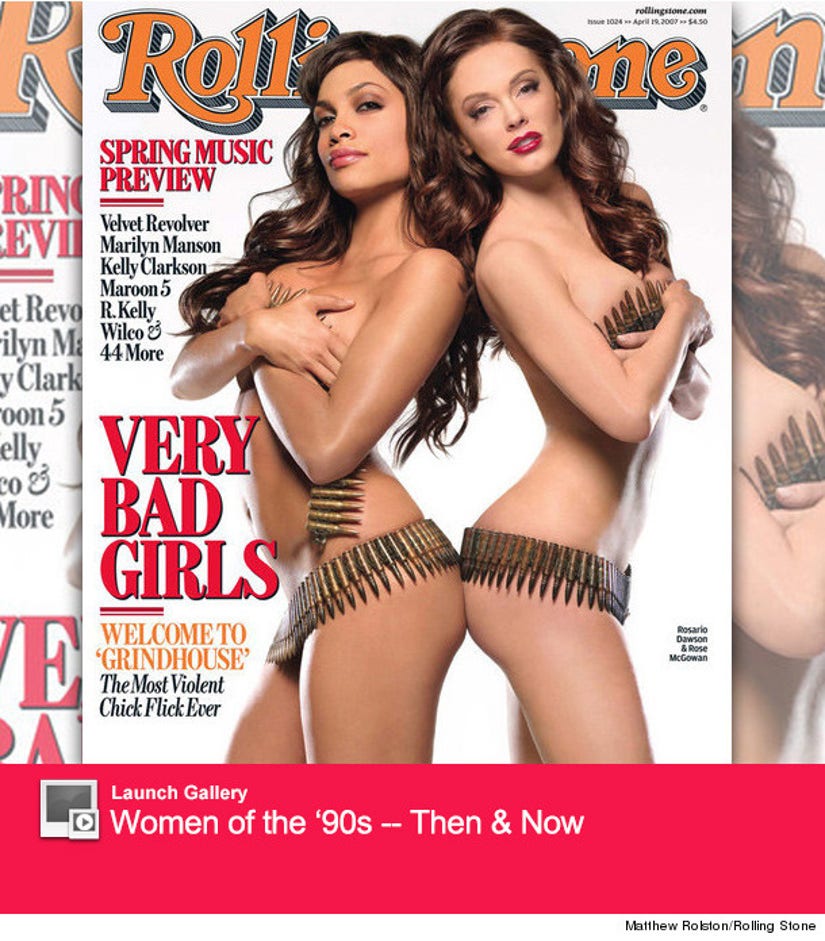 Jennifer Aniston, Christina Aguilera, Britney Spears, Miley Cyrus, Rose McGowan, Julia Louis-Dreyfus, Brooke Shields, Janet Jackson ... these are just a few of the female stars who have posed naked or topless for Rolling Stone, and one if them is seriously regretting her provocative pose.

McGowan and costar Rosario Dawson stripped down to some strategically-placed ammo belts to promote "Grindhouse" in 2007, but now -- 7 years later -- the actress is slamming her own cover and explaining how it's indicative of everything wrong with Hollywood.

"I just had this bouffant hairdo, this big bubble hairdo, this weird Photoshopped forehead that they gave me — I don't know why exactly, because my forehead was fine, last I checked — and this dark fake tan," she tells The Wrap. "I'm chest-to-chest with Rosario Dawson and an ammo belt around my hip was the only clothing I had on. And I was like, 'Who is that?'”

While both women look incredible in the photo, it's the fact that they used their bodies to sell the movie in the first place that really irks Rose.

"It's always part and parcel of it, you're expected as a woman, this is what you trade off of, this is how you sell tickets to the movies, this is your part of it,” she continues. "Your job as a promoter is this: They're not sticking a guy on the cover doing it, unless it's like Seth Rogen doing a joke. So as a woman I'm expected to sell myself, my body, my image, my sexuality, in order to get your ticket sales up. It's kind of f**ked up. And it's like, wait, I wasn't aware that when I signed on to act, I had to sell myself that much."

She says that's when she decided to step away from the biz for a bit, appearing in "Conan the Barbarian" in 2011, "Nip/Tuck" and a couple episodes of "Once Upon a Time."

Now 41, Rose is currently promoting her directorial debut, "Dawn." Check out the full interview at The Wrap to see what she said about making the flick and being labeled a "female director."