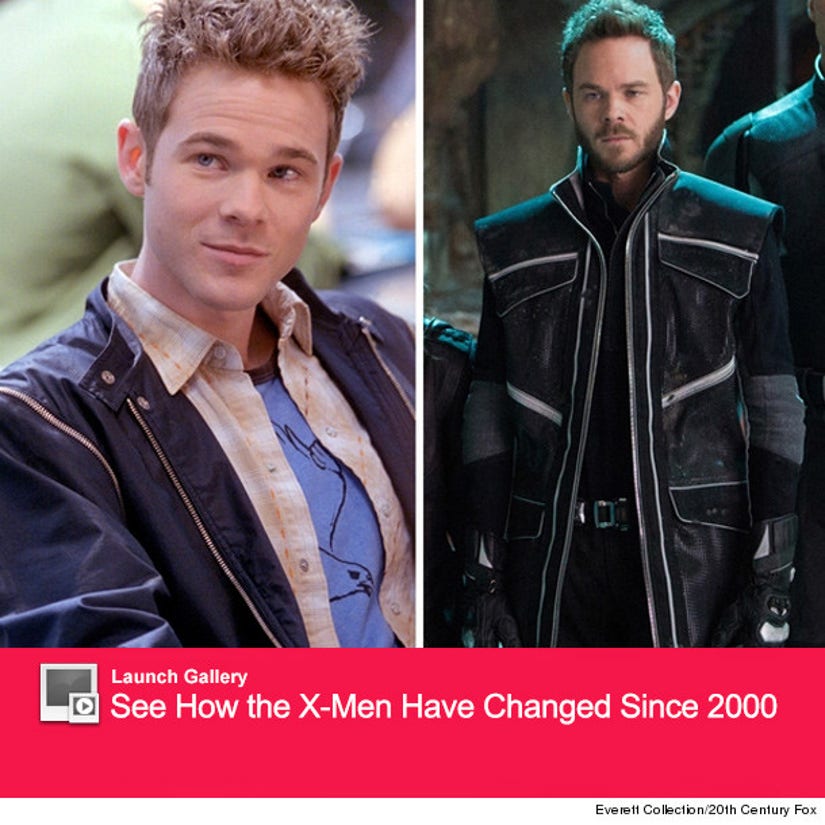 From 2000's "X-Men" to the massive success of 2014's "X-Men: Days of Future Past," Shawn Ashmore has been playing one of the coolest mutants around for the last 14 years ... and he has no desire to ever stop!

The actor was only one of the many original trilogy stars who returned for this year's time-hopping extravaganza, which found him reprising his role as "Iceman" Bobby Drake.

And while fans were thrilled to see him, Patrick Stewart, Hugh Jackman, Halle Berry and Ellen Page in the same flick as Jennifer Lawrence, Michael Fassbender and James McAvoy, there was even more of Ashmore left on the cutting room floor. The actor shot a 10-minute sequence with Anna Paquin and Ian McKellan that was edited out of the final film, but will reportedly be released sometime next year.

With the home video release of "X-Men: DOFP" coming October 14 (it's already available on Digital HD), toofab's Brian Particelli chatted with Shawn about re-teaming with his mutant BFFs again, being "disappointed" over his deleted scenes and if he thinks he'll return for future films. Keep reading for the full interview.

Brian: After "The Last Stand," did you think you'd ever be back in Iceman's shoes again?

Shawn: I definitely thought about it, I hoped so and then when "First Class" came out and I saw how great that film was, the direction that they were going, I wasn't so sure to be honest. I hoped we'd get the chance to do it again. When I started hearing the rumors and "Days of Future Past," I thought "Oh wow, this might be our chance to do this again."

I read the comic books growing up, so I knew that there was a time travel element to it. I thought this could be really cool. When it all came down to it, we got a chance to play these characters again, which was amazing. To be back with everybody, it's great to tell such an epic X-Men story.

Brian: What was that first day back on set like for you?

Shawn: Honestly, it felt like the first day back at school. It was new, but also very familiar. When you play a character in a franchise where you make a movie every five years, you spend a lot of time with these people. You work with them, but you also travel with them promoting. I hadn't seen some of the actors for years, but there's such a familiarity and bond that when you get together again, time hasn't really passed. It's difficult sometimes from a technical perspective but, once you get into it and get everybody back, it's honestly a lot of fun.

Brian: Now one sequence with Rogue didn't make the final cut, but will be released sometime next year. What was it like filming with Anna again -- and are you excited that fans will get to finally see it?

Shawn: I always had a blast working with Anna, we just had such a good time making these movies together. The first week of shooting we shot that sequence with Anna and it was great. I think it's a really fun sequence, it's a real cool sequence and I'm excited for fans to get a chance to see it. I'm excited to see it myself.

To be honest, I was disappointed because I think the Rogue/Bobby relationship is such a big part of my character in the film version of the series. It was nice for us to be together again and I thought it would be a familiar relationship for the audience. I was a little disappointed when I learned that sequence wasn't going to make it. I was disappointed that Anna wasn't going to be in the film more but there's a nice moment at the end that I thought was more poignant. I thought it landed and had a lot of impact.

Brian: If they ever recast Iceman like they did for "First Class," is there anyone out there you'd like to see play him?

Shawn: If we're doing the math properly and we're thinking the next film is probably set in the '80s, I would probably be a very very small child. I don't even know who I would want to play that character.

Brian: Do you think this is it for Iceman, or do you think we'll be seeing him ... and you ... again in the X-Men film universe?

Shawn: I can only guess. All I can really say is that I would love to do it again. It's a character that's been so much fun to play. These films are such a big part of my life now and the people involved in them as well. I honestly don't know. Your guess is as good as mine.