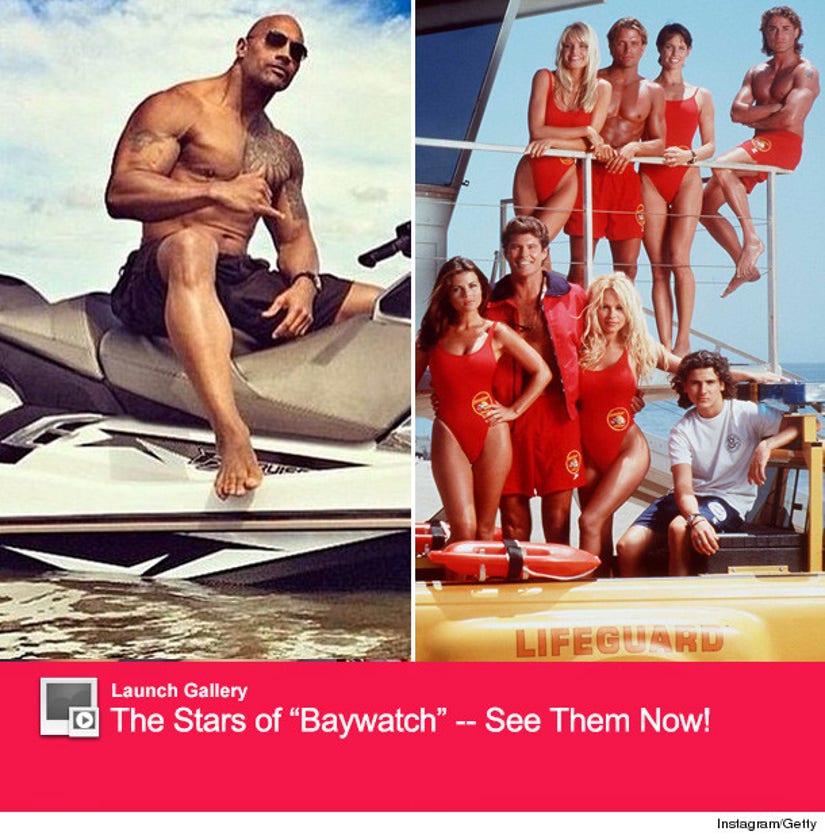 25 years after the show's premiere, "Baywatch" is coming back -- and this time, those bouncing beach babes will be on the BIG screen.

Paramount is moving forward with a film adaptation of the long-running series, with The Rock attached to star.

The actor confirmed the news on Friday with a photo of him on a jet ski (above) and the message "This is my beach bitch! Rumors are true... we're making #BAYWATCH the movie. Edgy, raunchy and hopefully, funny as all hell. Cue slo mo running on the beach... #WhoNeedsMouthToMouth #RedShortsBeHugginABrotha."

Well, if he needs any help getting that jog down just right, one of the show's original stars is offering up some assistance!

Alexandra Paul, who played Stephanie Holden, tells toofab that she hasn't been asked to be part of the new movie yet ... but she'd gladly help out.

"If The Rock needs some lessons on how to dive off a moving boat, run in slow motion or save a drowning extra, I am happy to volunteer my services," she says.

"I know The Rock will fill the red suit well and make all of us 'Baywatch: The TV Series' lifeguards proud," she continues.

We agree -- and can't wait until he slips into one of those famous suits!

toofab recently sat down with a couple stars from the show to celebrate its 25th anniversary, where Alexandra revealed she still swims at the same beach they used to film on -- and she even recently saved someone!

We also talked to her costar and good friend Jaason Simmons, who played long-haired Logan Fowler back in the day.

Since his tome on the series, the actor has come out, spent time in a monastery and starred in SyFy's "Sharknado"! Check out the interview below to see what he told us about being out to his former costars and if he regrets chopping off those long locks!