The stars of "The Walking Dead" get covered in blood, sweat and all sorts of nastiness on a daily basis ... all while running around in the Atlanta heat and doing some crazy stunt work to fight off a never-ending supply of zombies.

Now imagine doing all that while pregnant!

Sonequa Martin-Green -- who plays Sasha on the insanely popular AMC series -- is currently expecting her first child with husband Kenric Green, but she's not letting it slow her down.

The actress' costar Chad L. Coleman tells us that she's still a total "badass" on set -- and, in a new interview with toofab's Brian Particelli, Sonequa says she's doing her best while sporting a very real baby bump.

"I surely am trying," she says. "It's been great, I've been very blessed. I've been able to stay right along with everybody and keep on doing what I'm doing. I'm really really grateful because it would suck if I couldn't!"

As for if anything's changed on set, the 29-year-old mom-to-be says it's all about the H2O.

"I just have to do it a day at a time, I have to sleep a lot and eat a lot and hydration is the biggest thing," she tells us. "It is extremely dire that I stay hydrated because it could cause serious issues if not. [But] I'm just hanging in there, doing it!" 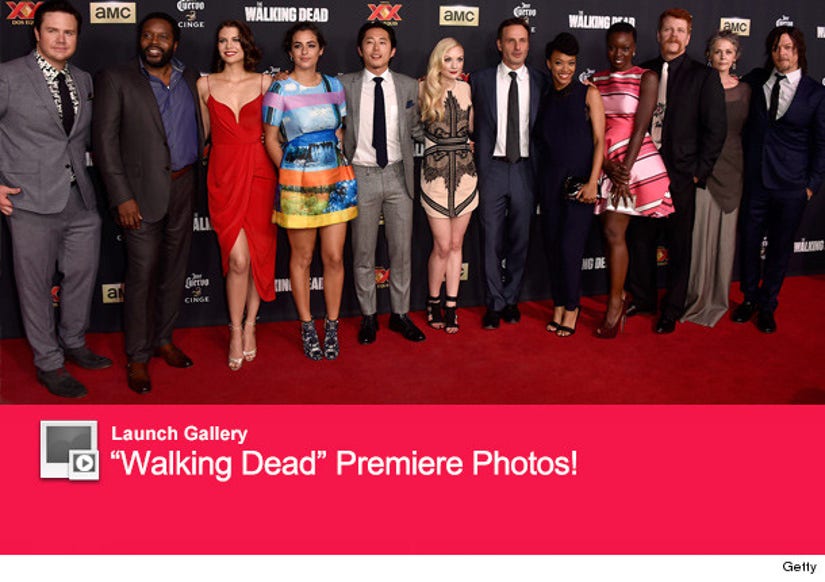 Sonequa put her growing belly on display at the show's big red carpet premiere for Season 5 at Universal CityWalk earlier this month, where she and her cast mates revealed what's hiding under all that dirt and grime.

"We spend a lot of time with each other off set, but whenever the crew members see us with clean faces they can barely recognize us," she says of her off-set transformation. "All I did was wash my face and put on some earrings! We all just marvel at each other when we're all dressed up. We think we all clean up very well and it's a nice surprise."

Sonequa promises some big changes for Sasha when Season 5 kicks off on October 12 -- check out the video above to see what she was allowed to reveal about what's to come!