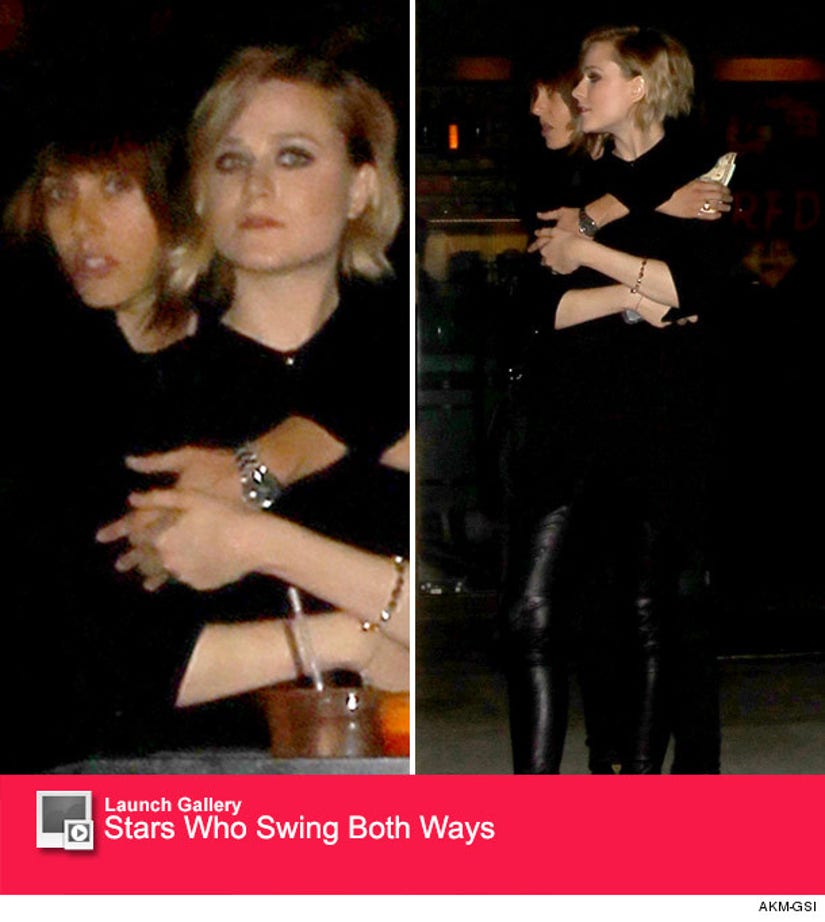 The two have reportedly been dating for a couple months now, but were photographed for the first time together last night in Los Angeles -- where they were seen getting cozy by the valet stand at Real Food Daily.

Dressed in matching leather pants and black tops, the couple held hands while Moening wrapped her arms around Wood.

It looks like the two actually met over Twitter last year, when Wood was still married to Bell. They exchanged a series of tweets after passing each other at the farmer's market.

@evanrachelwood you should have said hi. :)

@evanrachelwood many many thank you's. what a lovely thing to hear. And the fanship is mutual.

The two continued to talk online, before Wood split from Bell back in May. "Evan Rachel Wood and Jamie Bell have decided to separate," a rep for Bell told toofab at the time. "They both love and respect one another and will of course remain committed to co-parenting their son. This is a mutual decision and the two remain close friends."

Shortly after they separated, Evan had to fight off reports that Michelle Rodriguez broke up their marriage. "Complete lies made up to exploit a public separation, as if that isnt hard enough. Disgusting," she tweeted out. "Also just because you are in a photo with someone doesnt mean you spoke or slept together. Really guys?"

As for these new photos, the only thing Wood is saying about them is that she was surprised by the paparazzi taking them -- tweeting "Gotta be able to laugh about it I guess."

Evan came out as bisexual in an interview with Esquire in 2011.

"I'm more kind of like the guy when it comes to [dating] girls," Wood said at the time. "I'm the dominant one...I'm opening the doors, I'm buying dinner. Yeah, I'm romantic. I was always into very androgynous things. Guys, girls...I'm into androgyny in general."

What do you think of this new coupling? Sound off below!