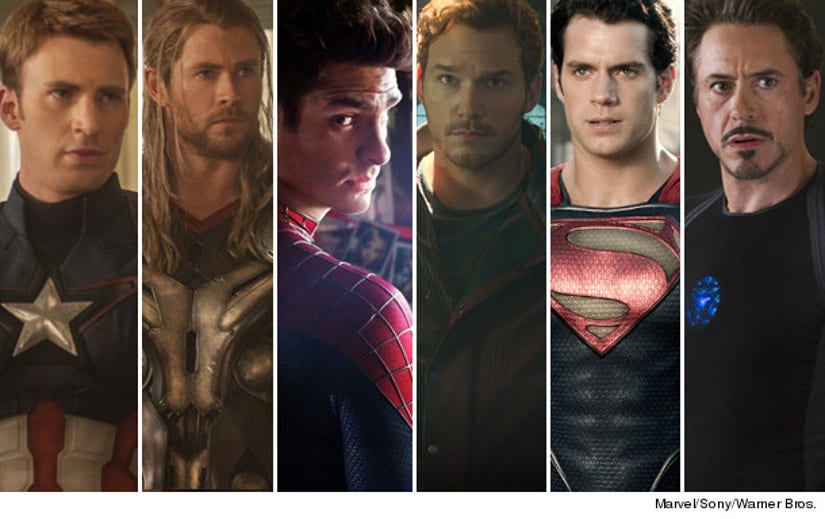 Batman, Superman, Iron Man, Captain America, Thor, Spider-Man and, thanks to "Guardians of the Galaxy," Peter Quill all have one thing in common -- and we're not talking about big box office hauls.

While Marvel reinvigorated the superhero genre with their expert handling of its properties, diversity has been an issue from Phase One. In the 10 films currently making up the Marvel Cinematic Universe, both women and people of color have been oddly under-utilized.

Thankfully, the studio is looking to fix that problem -- with standalone films for both "Black Panther" and Carol Danvers as "Captain Marvel" were both announced on Tuesday's big Marvel event in Hollywood.

Warner Bros. is also making some headway with their future DC projects, announcing solo films for Wonder Woman and Cyborg in 2017 and 2020, respectively ... while Sony announced a female-led spin-off from the Spider-Man universe for 2017.

But, thanks to Walt Disney Animation's new film "Big Hero 6," change is coming a little earlier than that.

The film -- adapted from an obscure Marvel property -- is heavily influenced by Japanese culture, with an Asian-American lead named Hiro Hamada. His gang of superfriends includes one African American character and, not one, but two women -- one of whom is Asian as well.

It's refreshing, even if it is something that we really shouldn't have to point out in 2014.

"The fact that it is a conversation and that it's a positive conversation, just shows the progress," Damon Wayans Jr. (who plays Wasabi) tells toofab's Brian Particelli. "The fact that this movie is being done and it's gonna be seen by so many people and it's going to influence -- especially if it's a hit -- it's going to influence more studios to make movies like this. I think it's definitely breaking boundaries."

"Being Asian American, there's only so many roles that we can go out on," adds Hiro himself, Ryan Potter. "For the longest time, we were being typecast and now this film, they don't make big deal about it in the film, but that's why it is such a big deal. If the United States is the melting pot of the world and if there's such diversity here, you have to have the media here to represent that. This film definitely represents what the United States looks like and what it's gonna look like."

The two female characters, GoGo and Honey Lemon, hold their own as well ... without being reduced to a love interest or falling prey to the so-called Trinity Syndrome.

"I feel that little girls will identify with one or another," says Genesis Rodriguez, who voices Honey, of both characters. "I hope we instill the same thing, which is they're superheroes because they're brilliant. They applied themselves in school and want to be the best they can. I hope girls think they can become superheroes that way too, to not be afraid to be smart."

Take all this diversity, throw in an adorable inflatable robot named BAYMAX and mix in some awe-inducing action sequences and you've got the superhero movie we all deserve.