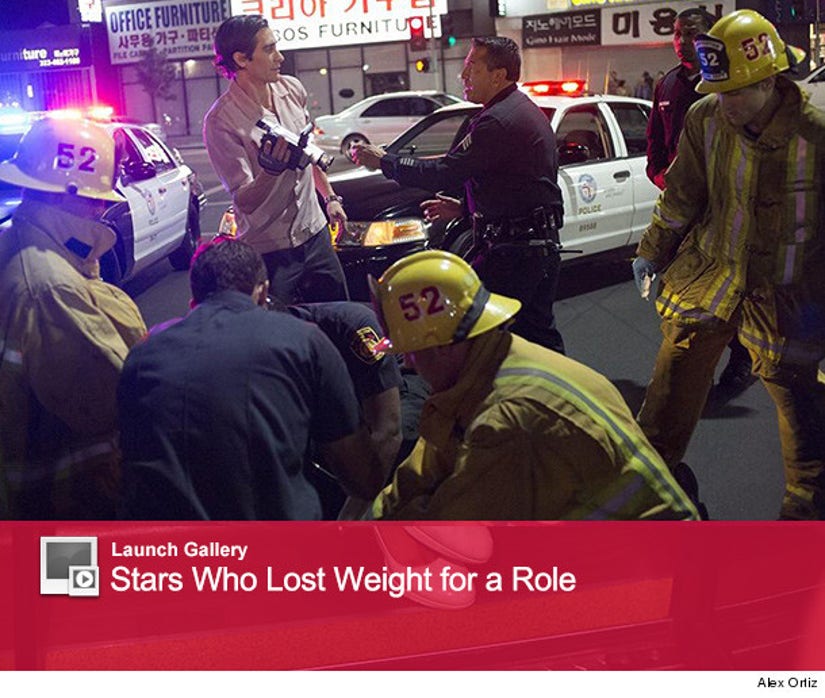 Jake Gyllenhaal's new movie "Nightcrawler" hits theaters this weekend -- and the actor's makeunder is all anyone is talking about.

The high-speed thriller follows a freelance journalist who uncovers some pretty crazy crimes, but ends up becoming the star of his own story. Jake had to lose serious weight for the role, which left him almost unrecognizable!

toofab's Candice Brock had the chance to chat with Alex Ortiz, an LAPD police officer who stars alongside Gyllenhaal in the flick, about working with the "super nice" actor and his shocking transformation for the movie.

toofab: Was this your first movie?

Alex: That was my first movie I've done. I have two episodes of "LAPD Life On The Beat" from the '90s. I have about 30 sound bites from the media when I was working [in the] Hollywood division. I used to do that a lot, but this was my first movie.

Alex: It was awesome! I'm not one of these guys who is stunned by stars because I've been around them a lot. But he was, really nice. He was professional and when he needed my scene to be tweaked a little bit he would say, 'Hey Alex, let's do this or how about if you do that, that might work a little bit better. Or everything's going perfect.' He was great!

toofab: So he gave you some tips, did you give him any tips while filming?

Alex: The biggest thing he said was just be yourself, and then everything will come into play, 'If you want me to be myself then I'll have to physically man-handle you and I might hurt you.' He told me, 'That's what I want, be aggressive with me' because part of the scene they wanted me to man-handle him and throw him onto a gurney which was basically like throwing him on the ground. I didn't want to hurt him because he was so thin and had lost a lot of weight. I said, 'my god Jake I don't want to hurt you.' He said, 'Alex, be aggressive treat me the way you would treat me out there, be aggressive I want you to man-handle me.' So I did. You could tell he was totally into the character and what he had to do, it was great, it made filming a breeze.

toofab: That's good that his weight loss didn't affect how you worked with him on set.

Alex: It was a great experience like I said. I didn't know what to expect from him. He wants it [the movie] to do well and he wants it to be outstanding. When I went to the premiere and saw the movie a couple of weeks ago. He was creepy! When I first saw him I was like 'Oh my god.' They said 'Hey he had to lose weight for the movie because he had to fit into the scene.' So that was him doing that extra, to lose weight to get into character even my fight scene he wanted it to be perfect, that's why I was there, he wanted it to be believable and it was.

toofab: In terms of his weight loss, did he have a special diet on set?

Alex: I didn't see him eating anything special, he was busy working that movie, and honestly he wasn't being treated much differently. He wasn't taking time out to take a protein drink or drinking extra water. I think because the movie had to be done in 28 days, I think he knew the strict diet he had to do to get to where he was at, was pretty much done.

toofab: In your career as a police officer, have you ever encountered a real life nightcrawler?

Alex: In my younger years I remember always seeing them. They would roll up to calls whether they were accidents or especially shooting calls in the early '90s. We had tons of shooting calls especially in South LA where I was working. They would just start filming. As long as they didn't cross my yellow tape, I was fine with that. You don't see that too often anymore because of the age of cell phones. Nightcrawling is almost a lost art.

Be sure to check out "Nightcrawler" when it hits theaters today! Click "Launch Gallery" to see more stars dramatic weight loss for movie roles.