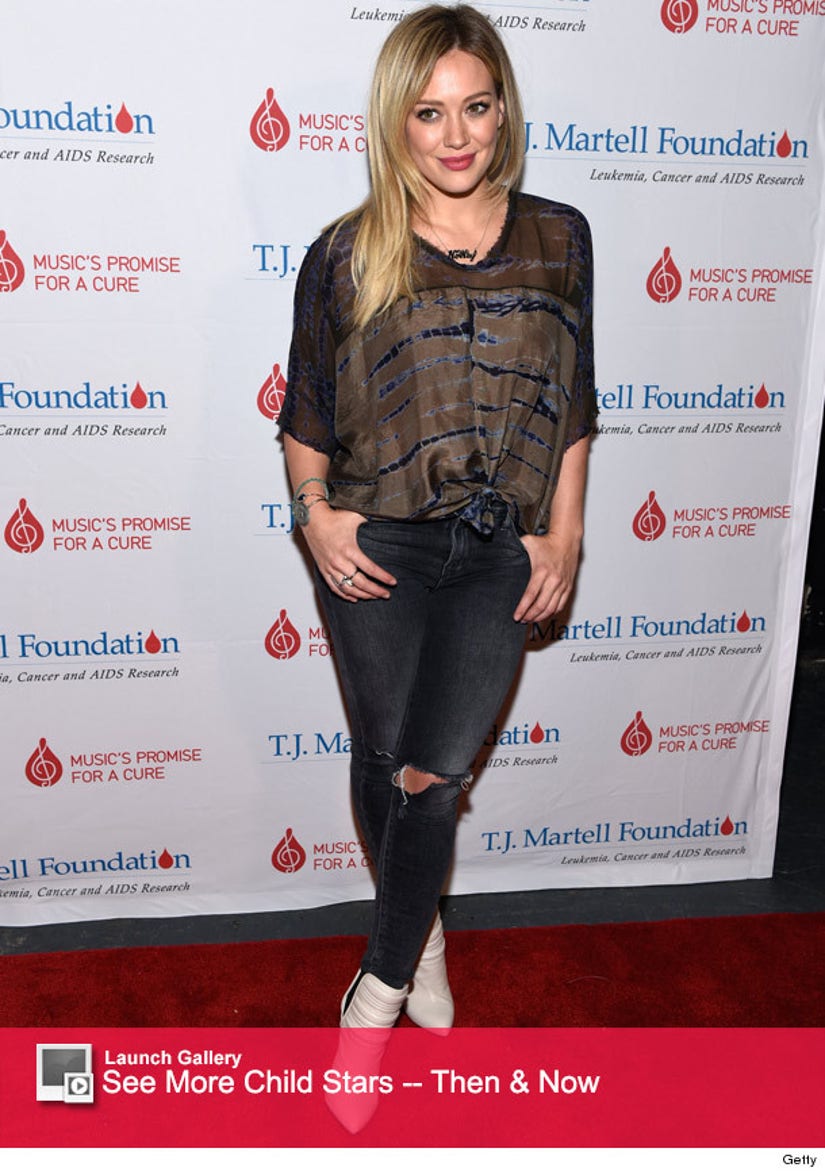 Hilary Duff's feeling braver than ever!

The former Disney star covers the latest issue of Elle Canada, where she opens up about growing up in the spotlight, Aaron Carter's recent declarations of love and raising her son Luca in Hollywood.

Duff -- who rose to fame on Disney's "Lizzie McGuire" -- says that growing up in the spotlight was a difficult process.

"I think I'm more content now—especially since I took time out of being on tour and in movies. It was hard because [when I was 16] everything I did was watched. I had this idea of who I was, but the whole world thought I was so much bigger," she tells the mag.

"Does that make sense? It was a very confusing time. It was a lot of pressure, and I became more content with myself when all the competition was gone and I could make choices for myself. I f--ked up along the way too, but I got to do it quietly, which was awesome. Now, turning 27 feels weird. I still kind of feel like a kid. I'm a kid with a kid."

The actress also had a very high profile relationship with fellow child star, Aaron Carter. The two eventually split when reports surfaced that Carter was cheating on Duff with Lindsay Lohan.

It seems like Nick Carter's younger brother still has a soft spot for Hilary, though. He's posted numerous tweets about his feelings for the pop star earlier this year. So what does the blonde beauty think about Aaron's declarations of love?

"Oh, God, I feel so uncomfortable right now. I don't know what to say. The more I talk about it, the more I think he's going to talk about it. We were like 13 and 14.... I don't want him to be hurt—I don't want to make anyone feel like that—but it's time to move on. I have," she reveals.

"What's funny, though, is that those feelings—I'm not talking about him but young love in general—feel so real," she says. "You always kind of think about it. When you're dating, you can never quite get that excitement again, because you're never that age again."

While the 27-year-old has been in showbiz for over a decade, she still struggles with living under a microscope. So how does Duff deal with it?

"I have a good therapist! [Laughs] I've dealt with [attention] for such a long time. But some of the bigger struggles that came my way in the past two years—like my separation or when my parents separated—were the first times I had to deal with people knowing about something personal happening to my family. It just felt so invasive and insensitive. It got really gross, and I think part of you gets a bit desensitized. The best way to handle it is by just owning your shit. I'm human and this is what happened. None of us is perfect," she confesses.

But the "A Cinderella Story" star says that her son Luca, who she shares with her estranged hubby Mike Comrie, doesn't quite understand what it means to live in the spotlight yet.

"I think he's starting to figure it out, but I don't really know what he thinks yet. I don't tell him anything about my job, but he knows Mommy's a singer and an actress. We have this book called 'Goodnight Los Angeles.' It's like, 'Goodnight, movie stars and entertainers of Los Angeles!' and it shows people working on a set and having their names in lights. Mike's always telling Luca 'This is where Mommy is!' when I'm at work," she reveals.

Well, it sounds like Hilary has fared far better than many of her child star peers -- what do you think about Duff's candid comments? Sound off below and click "Launch Gallery" above to see even more child stars then and now!