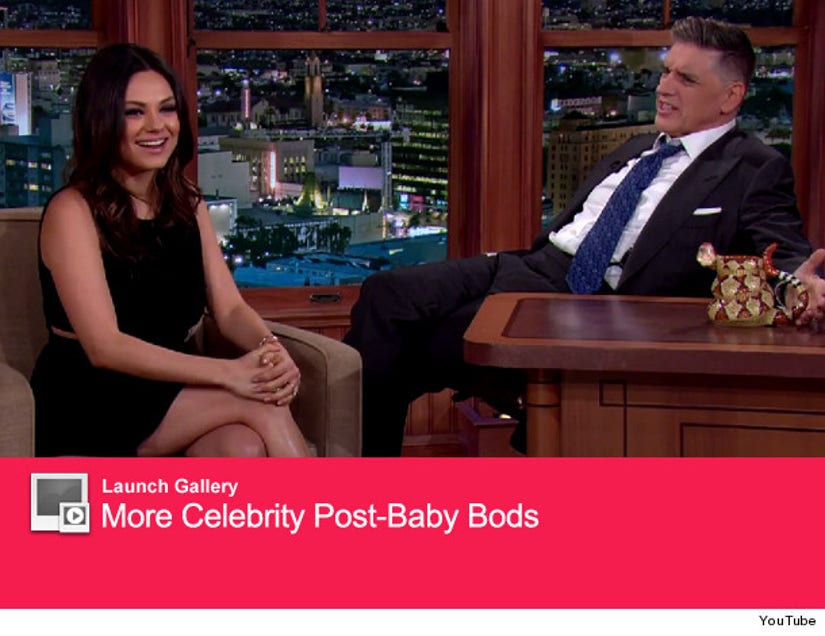 Mila Kunis made her first talk show appearance since giving birth to daughter Wyatt Kutcher on Oct. 1, stopping by "The Late Late Show" to talk about life as a new mom.

"Anything going on in your life?" Craig Ferguson joked. "You know, a couple things," Kunis said with a laugh.

The "Third Person" star went on to talk about nine week old Wyatt. When the late night host admitted the "girls are easy," Mila agreed, saying, "I think so."

"My sister-in-law had a little boy two weeks prior to us having our little girl and it is completely different. Everything," she added.

Ferguson also commented on Mila's post-baby bod, which she flaunted in a LBD with side cut-outs that showed off her toned abs.

"Breastfeeding's a great workout!" the brunette beauty said. "Let me tell you!"

"I seem to eat a lot, so that kind of keeps me going through the day. [It's] not too bad," the actress revealed, adding, "I do love to eat healthy."

The "That 70's Show" alum has been enjoying spending time at home with her little one. "I was able to take time off work, which was nice. I went home! That is my version of time off," she explained.

"I spent all my 20s traveling. It sounds crazy, but I did spend all my 20s traveling and it's the greatest experience ever. You get to see the world and you experience life and you meet people, but you don't have a home. When I decided to take time off, all I wanted to do was have the same bed to wake up in, a routine, a house—and it was great," she continued.

Check out the clips to hear more about Mila's life as a mom!