As Pepper on "American Horror Story," Naomi Grossman is one of only two stars to play the same character on two different seasons of the popular show.

And tonight, it all comes full circle!

Wednesday's episode of "Freak Show" will explain the popular pinhead's backstory, explaining how she went from a sideshow attraction in Jupiter, Florida to Briarcliff Manor in Massachusetts. It will also find Lily Rabe returning as her "Asylum" alter-ego, Sister Mary Eunice.

Angela Bassett Reveals What It's Like to Have Three Breasts

With this episode giving Grossman some time to shine, we had the actress stop by for a chat with toofab's Brian Particelli -- where she went over the full-body transformation she goes through to get into character and teased what to expect from the mid-season finale.

"It's about a three hour process," she says of the make-under. "That's lightning speed compared to what it was [on 'Asylum']. It used to be about six hours with two guys, now it's three hours with one."

The transformation includes prosthetic nose, brow, ears, hands, fake teeth, "wonky" eye and daily head-shavings. Grossman was only 10 days from her last shave when she visited the toofab studio.

She says she's been getting recognized more and more, especially in New Orleans -- where the show films -- because the residents "had their Freak-dar finely tuned." 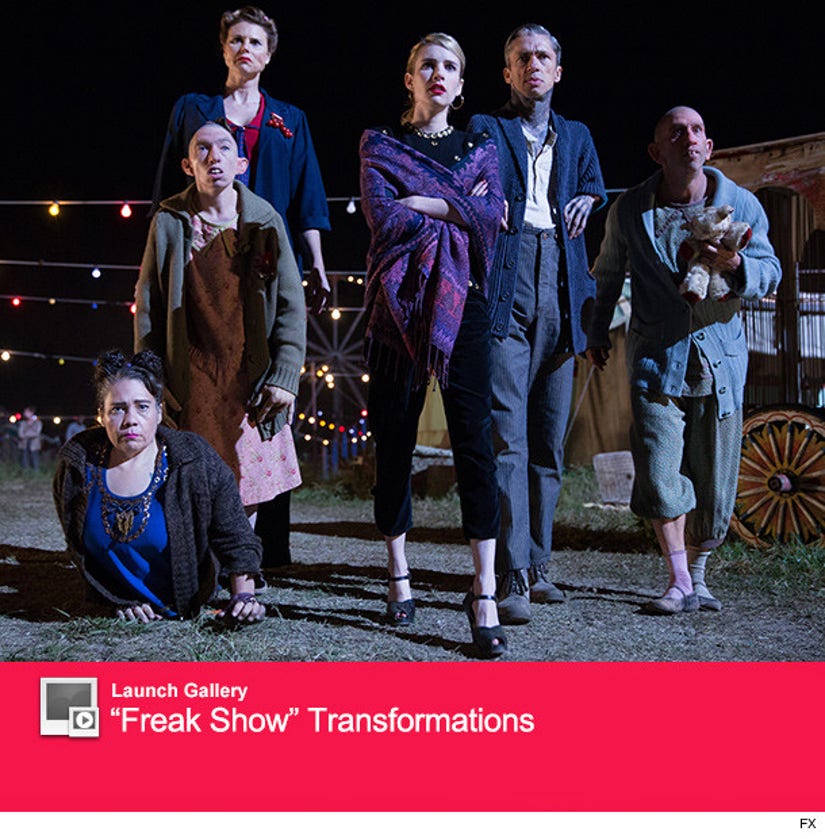 Grossman also says she was thrilled to get the chance to step into Pepper's shoes again.

"I was confused, breaking their own rules for me?", she tells us, referring to creator Ryan Murphy's desire to have actors play different characters each season. "It just didn't seem possible. But apparently it is."

Teasing tonight's show, she adds that "'Freak Show' contains Pepper's origin story. We haven't seen that yet, so we're going to see that."

Which "Horror Story" Star Is All About Dandy's "Cute" Booty?

As for working with Lily again, Grossman reveals some insider dirt about life on set.

"There's sometimes like a hierarchy in Hollywood. There's the series regular and then the guest star and she was a series regular and I was a guest star," Naomi says. "She never did anything to make me feel less, but still, that exists. This time around, I'm still just a guest star. But she wouldn't be there if it weren't for me and I think she knew that. She definitely, she was very gracious and treated me with the greatest of respect. It's really lovely!"

Watch the video above to hear her talk about some of the more unfortunate interactions between the public and some of her costars -- including one in particular that made her "really mad."

See what she told us about the SHOCKING finale below. Warning: Spoilers ahead!