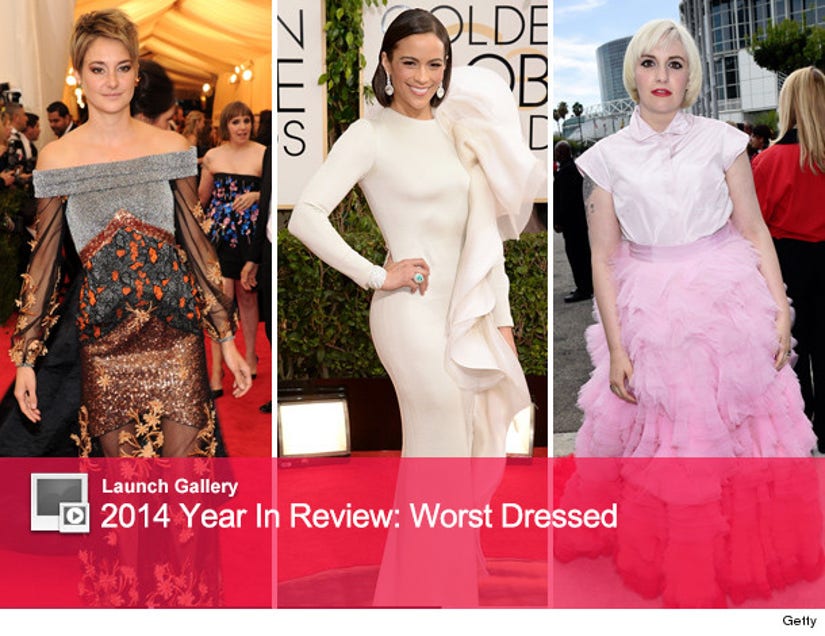 What a wild year in celebrity fashion!

2014 brought out the good, the bad and a whole lot of ugly from some of Hollywood's biggest stars -- and toofab's rounding up this year's biggest fashion offenders.

Shailene Woodley took "art" to a whole new level at the "Charles James: Beyond Fashion" Costume Gala at the Metropolitan Museum in New York back in May. While everyone knows the Met Gala is about pushing fashion boundaries, "The Fault in Out Stars" actress' ensemble was just plain ugly. Is this even a dress? It looks more like some strange sci-fi costume. Needless to say, we're huge fans of the "Divergent" star ... but this look should've never seen the light of day!

But, Woodley wasn't alone -- Paula Patton decided to really make a statement at the 71st Annual Golden Globes in Beverly Hills back in January. While in theory the white dress isn't all that bad, we don't know what what the heck is the purpose of all that extra material running down the side of her body. Talk about distracting!

And no worst dressed list would be complete without our favorite fashion offender, Lena Dunham!

The brilliant HBO writer seems to always miss the mark when she hits the red carpet. The "Girls" star sported this ombre ensemble at the 66th Annual Primetime Emmy Awards in Los Angeles back in August. While Lena's hair and makeup look better than usual, we can't get over that skirt! Is it just us, or does she look like walking cotton candy?!

But these ladies weren't the only fashion hazards of the year -- click "Launch Gallery" above to see even more of 2014's worst dressed stars!