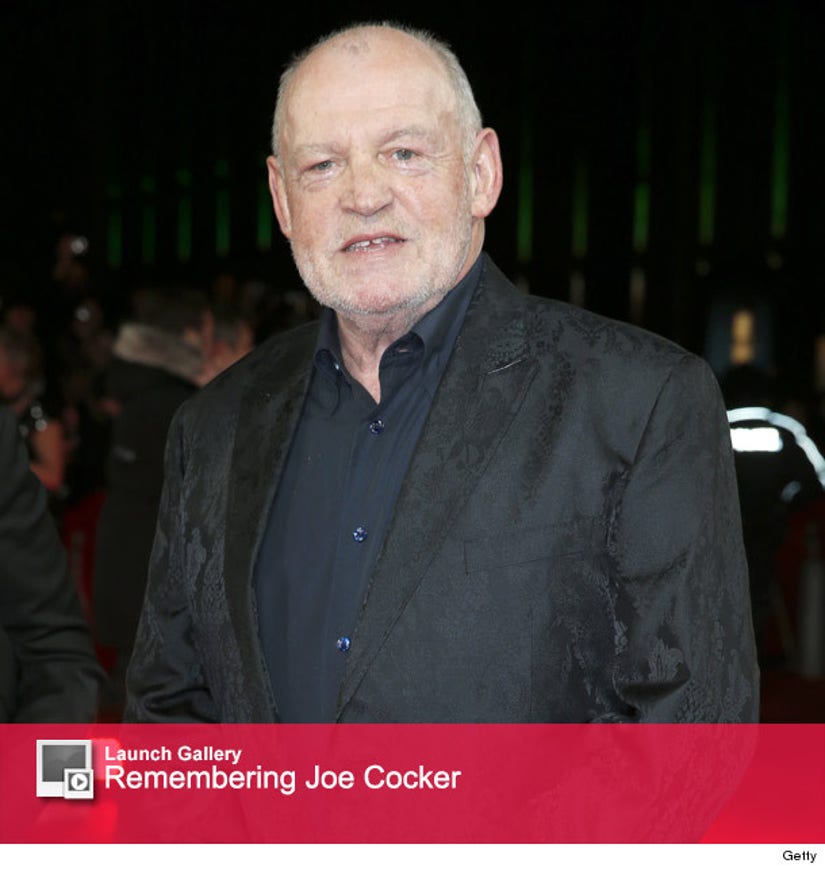 The singer-songwriter, best known for his cover of The Beatles' "With a Little Help From My Friends," passed away after a battle with lung disease.

The late rocker's rep released the following statement on Monday:

John Robert Cocker, known to family, friends, his community and fans around the world as Joe Cocker, passed away on December 22 after a hard fought battle with small cell lung cancer. He was 70 years old.

"Joe Cocker is a legendary artist of rock and blues history and yet he was one of the most humble men I've ever met," Edgar Berger, Chairman and CEO of Sony Music Entertainment, said. "His iconic voice will forever be etched in our memories and our thoughts go out to Joe's wife Pam and his family at this difficult time. Joe will live on in the hearts of millions of fans around the world."

The legendary musician is survived by his wife of 27 years, Pam, his brother, Victor, his step-daughter, Zoey Schroeder, and his two grandchildren, Eva and Simon Schroeder.

Almost immediately after news broke, his fans took to Twitter to remember the star and offer their condolences.

Ah. What a mighty mighty original voice is gone. Joe Cocker one of the all time soul of Rock and Roller Kings will be missed forever.

My favorite singer of all time died today. Joe Cocker sang me through nearly every major moment in my life since I was 10. #RIPJoeCocker — Bug Hall (@Bug_Hall) December 22, 2014

Goodbye and God bless to Joe Cocker from one of his friends peace and love. R😎✌️🌟💖

RIP Joe Cocker. You were so beautiful.

RIP Joe Cocker. Such an inspiration to me and music. His voice will carry on.

RIP Joe Cocker....one of my favorite voices ever

WE LOVED YOU FOREVER, WE WILL MISS YOU ALWAYS...RIP JOE COCKER.

So sad to hear about Joe Cocker. What an entertainer. One of a kind voice. Rock won't ever sound the same.

Watching #JoeCocker sing was my first exposure to what it meant to be an artist. The means aren't always pretty but boy is the end beautiful

So sorry to hear of the passing of #JoeCocker - he was a mentor to me. May he rest in peace. https://t.co/JDWsxJyWso

Goodbye to Joe Cocker. There was never anyone like him, and there never will be again. The one of the Sounds of an Era passes.

RIP Joe coker. You are so beautiful...

My mom played Joe Cocker all over the house when I was little. So sad to see him go so young.

Sad to hear of Joe Cocker's passing.I interviewed him on my radio show years ago, he sang #YouAreSoBeautiful on the air.Incredible man. #RIP

Another legend has made his mark & left us with the gifts of funky soul in his music. "Mr. Joe Cocker" gone at 70... https://t.co/F18vbiwtFB

Oh no I just read Joe Cocker passed away. RIP mad dog I wish I could've seen your brilliance live, you are as iconic as they come.

Sad to hear Joe Cocker has passed away. Our prayers go out to his family.