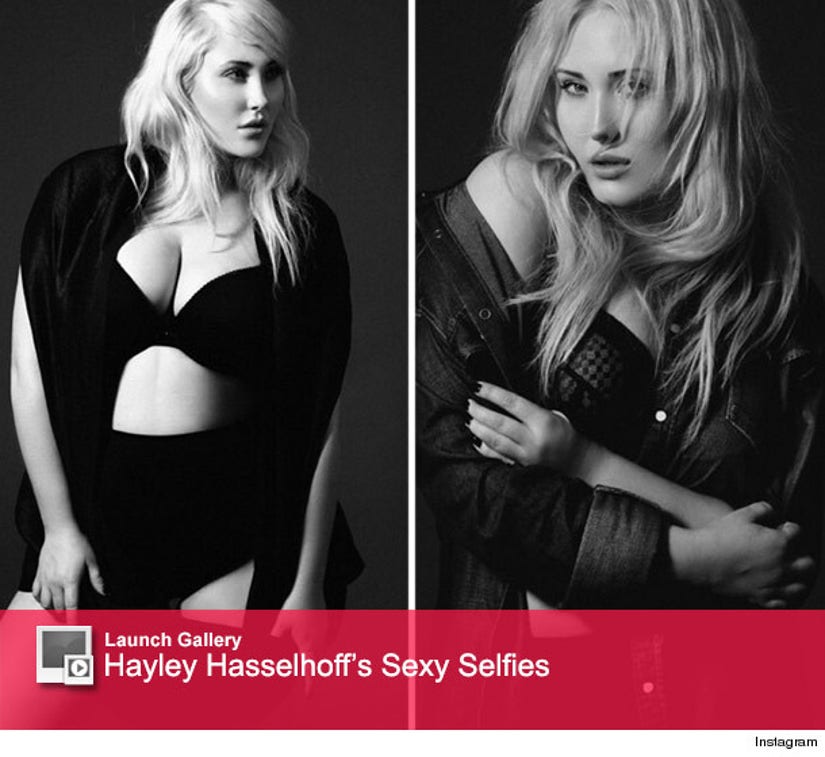 Her father made a name for himself by showing some skin on "Baywatch," and now, Hayley Hasselhoff is proving she's just as proud of her physique.

toofab's Candice Brock sat down with the plus-size model to talk about how she embraces her curves, her upcoming projects (including a possible lingerie line) and the best advice dad David Hasselhoff has given her.

This past year has been pretty amazing for the gorgeous blonde. Not only did Yahoo! select her as one of the "11 Plus-Size Models You Need To Know," she was also named 2014's Best Plus-Sized Model at the British Plus Size Fashion Awards in November.

Hasselhoff, 22, says she was simply "humbled and honored" just to be nominated.

"I was in a category with girls I look up to and girls who have been in this industry for such a long time," she tells toofab. "To be nominated was so humbling and then to win it was even more!"

The young star has fully embraced her curves so much so that she's not afraid to show them off, especially to her thousands of Instagram and Twitter followers

Hasselhoff recently posted a super sexy lingerie shot that we just had to ask about:

"I shot with my good friend [Andres De Lara] and just decided to kind of do a lingerie shoot and celebrate my curves in a sense," she dishes. "I posted it out there and it was a fun thing to do. I love lingerie to the fullest."

Does that mean we'll see a lingerie line from the star some time soon?

"You're going to have to wait and see what year it will come out, but this is something I've been wanting to do since I was a little girl," she reveals. "Being somebody who's pretty busty myself, I've had a hard time in my life trying to find bras or great lingerie that would fit my bust. I want to be able to give that to busty ladies, but also make it so it's beautiful and comfortable at the same time."

Hayley, who starred in the television show "Huge" and the reality series "The Hasselhoffs," also plans to focus on acting this year. Just don't expect to see her on anymore reality TV in the near future.

"Acting is my pure heart and soul. I have a film coming out called 'Fearless' in the next year. Reality, I don't think I'll ever do again," she confesses. "It's not really something I enjoy doing nor do I see it on my radar, unless it had to do with fashion. I wouldn't do something where it's another show that shows my life."

So, what does The Hoff think of his daughter's budding career?

"He loves it! He's so supportive," Hayley said. "They're so proud of me, they've always told me to follow my dreams. They're all a part of it and so supportive. We're a close family, so it's really great to go back to them and tell them whats going on."

And since her proud pops has spent a good deal of time in the spotlight -- both good and bad -- he comes equipped with some pretty spot-on advice for his daughter.

"The biggest advice is really follow your dreams, follow your heart and be kind to everyone around you," she says he told her.

We expect to see more of this one in the future -- check out more of her sexy selfies in the gallery above!