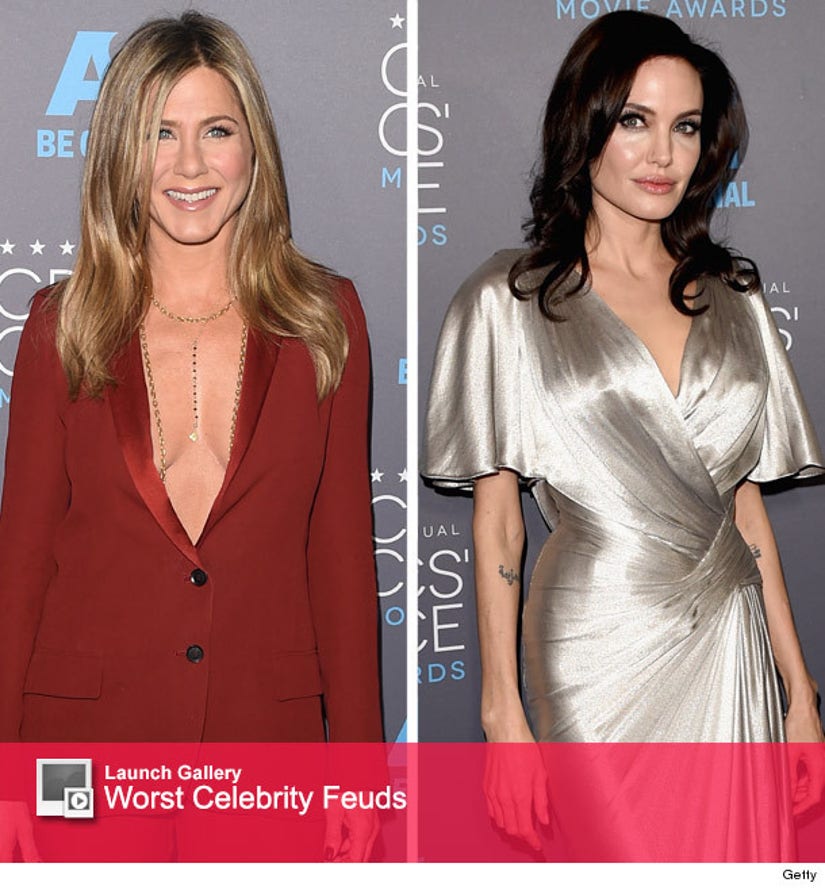 It sounds like there's no bad blood between Jennifer Aniston and Angelina Jolie!

The "Cake" star gushed about Mrs. Brad Pitt's new film, "Unbroken" to Entertainment Tonight after their near-runin at the Critics' Choice Awards on Thursday in Los Angeles.

When asked if leading ladies' media-driven rivalry -- which dates back to when Aniston and Pitt split in 2005, shortly after he met Jolie on the set of "Mr. and Mrs. Smith" -- may finally be coming to an end, Jen had only positive things to say about the budding director.

"I think that's slowly coming to an end. I really do," she said of the media hoopla.

And not only does the blonde beauty not have anything bad to say about the "Maleficent" actress, she also admits she's actually a fan of Angie's work!

"I mean, that movie is so beautiful and wonderful, and she did such a gorgeous job," she gushed, referring to "Unbroken," which follows the incredible life of Olympian/POW, Louis Zamperini.

"I think it's time people stop with that petty B.S. and just start celebrating great work and stop with the petty kind of silliness," she continued. "It's just tiresome and old. It's like an old leather shoe. Let's buy a new pair of shiny shoes."

It's been over 10 years since the Pitt split .... and, we gotta hand it to the "We Are The Millers" star, she really does sound over whatever happened.

Plus, we're sure it doesn't hurt that she's got an equally sexy man by her side these days, in the form of Justin Theroux.

What do you think about the 45-year-old's candid comments? Tell toofab below and click "Launch Gallery" above to see some real celebrity feuds!