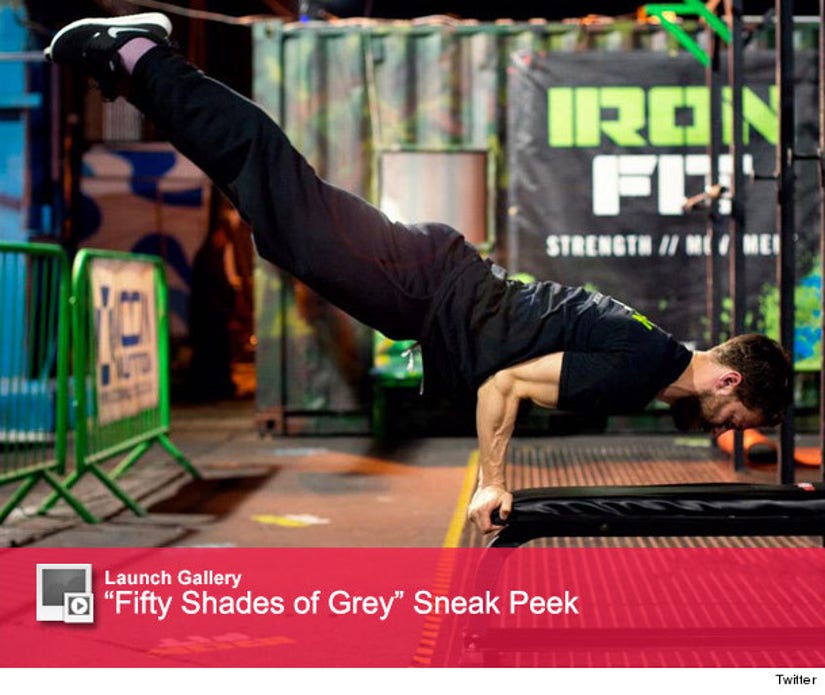 Jamie Dornan works hard on that body ... and it shows!

The "Fifty Shades of Grey" star took to Twitter on Tuesday to share a very impressive workout pic, where he's showcasing his bulging biceps as he performs a full-body lift.

"With the boys @Iron_fit down @T13 . Gave them 2 seconds to take this picture before I collapsed & cried . #ironfit," he captioned the photo.

So, how did the Irish actor get in shape for the racy (and very naked) role of Christian Grey?

"He's pretty obsessive about staying in shape and exercise. It's a big part of who he is. So we had to work on that," Dornan told Details of his character. "But, you know, I came into the game quite late with it, so I probably would have liked a little more time to sort of get in peak shape but we did what we could do with the time we had."

Judging from the sneak peeks, we think Jamie did more than enough to prep his body for those steamy sex scenes with costar Dakota Johnson.

In a new clip that aired on Wednesday's "Today," Christian (Dornan) warns Anastasia Steele (Johnson) that he's not interested in romance ... while showing off his amazing abs.

"Why'd you send me those books?" Ana asks. "I thought I owed you an apology," Christian says. "For what?"

"For letting you believe that I—listen to me, I don't do romance," he explains. "My tastes are very...singular. You wouldn't understand." Ana responds perfectly, saying, "Enlighten me then."

It's getting hot in here!

Another clip aired this week on the NBC morning show, with Christian trying to learn more about Miss Steele as he offers her an internship at his company.

We can't wait to see "Fifty Shades of Grey" when it hits theaters Feb. 13 -- just in time for Valentine's Day!

For now, get your fix by watching the clips above.