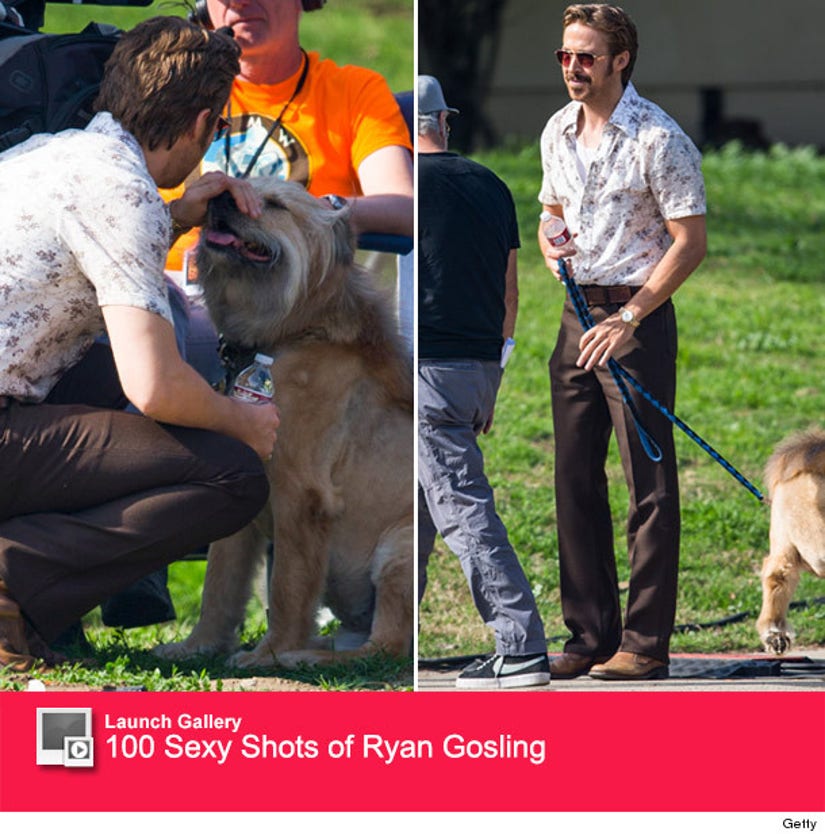 The actor brought his adorable pooch George to the set of his new flick, "The Nice Guys," in Los Angeles on Tuesday.

Rocking brown slacks, a vintage button down shirt, aviator shades and a '70s-inspired 'stache, the 34-year-old still looked handsome as he filmed scenes for his new crime-thriller with Matt Bomer and Russell Crowe.

Gosling even took time between takes to pet his pup and give him some water from a bottle. Let's all let out a collective "Awwww!" right about now.

The first official trailer for Ryan's directorial debut, "Lost River," also dropped on Wednesday -- and we're finally getting to see what the eerie drama is all about. Check out the trailer below!

"Lost River" follows a single mother (Christina Hendricks) who is pulled into a dark underworld, while her teenage son discovers a mysterious underwater town. The fantasy flick also stars Gosling's baby mama Eva Mendes ... who ends up lying on the floor covered in blood in the spooky new clip.

The movie -- which was written and directed by Ryan -- premiered at the 2014 Cannes Film Festival, where it was panned by critics.

While we haven't heard much about the flick since, Warner Bros. finally set a release date. "Lost River" will hit theaters April 10.

What do you think about "Drive" star's new movie? Tell toofab in the comment section below and click "Launch Gallery" above to see 100 sexy photos of the 34-year-old stud!