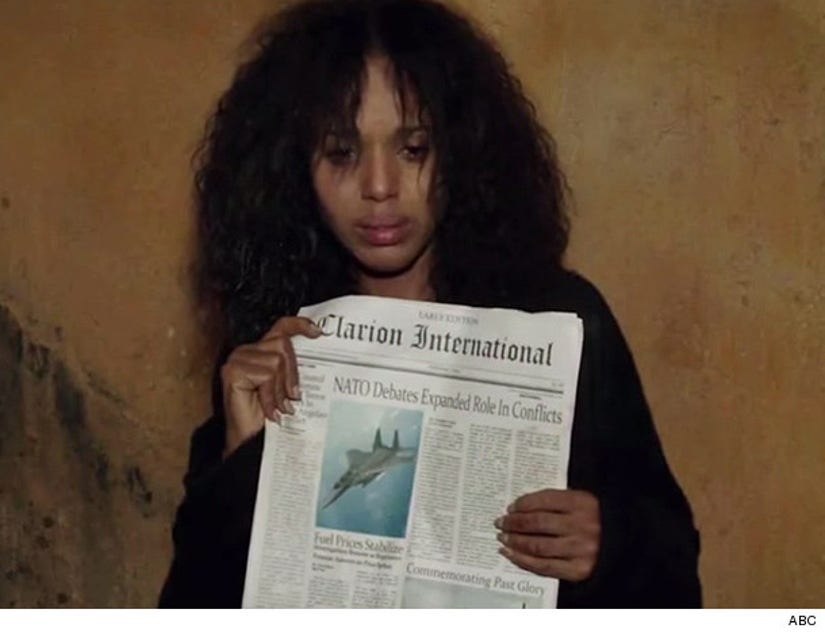 Thursday's episode of "Scandal" left us with even more questions about the fate of Kerry Washington's character, Olivia Pope.

Just one episode after Liv was snatched, Vice President Andrew Nichols (Jon Tenney) came forward as her kidnapper, demanding that President Fitzgerald (Tony Goldwyn) declare war on West Angola – or else, Olivia would die in 48 hours. This, of course, was why he and Elizabeth (Portia de Rossi) had her followed this whole season ... to advance the Republican agenda.

toofab's resident gladiators are breaking down the full episode to explore some of the burning questions every "Scandal" fanatic has after tuning in last night. 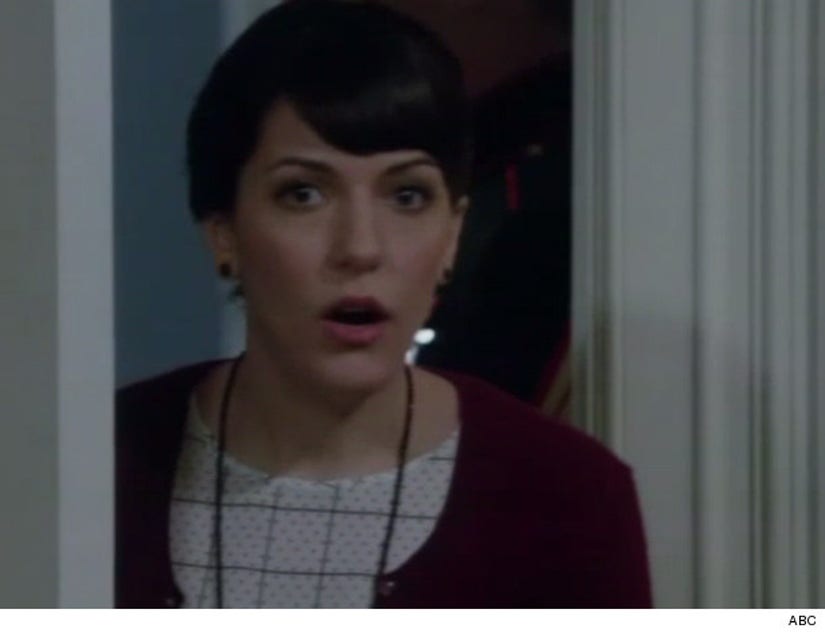 First thing's First: Where's Lauren? THIS is not Lauren.

If you're wondering who Lauren is, it's the woman who has hands-down-without-a doubt the best job in Shondaland. She's Fitz' right-hand-woman (aka Secretary/call screener/overall schedule keeper) who is CONVENIENTLY absent from the top of this episode.

This girl is NOT Lauren. She may look and dress like Lauren, but you can't fool me "Scandal" – that was my first clue that the ish was prolly gonna hit the fan. 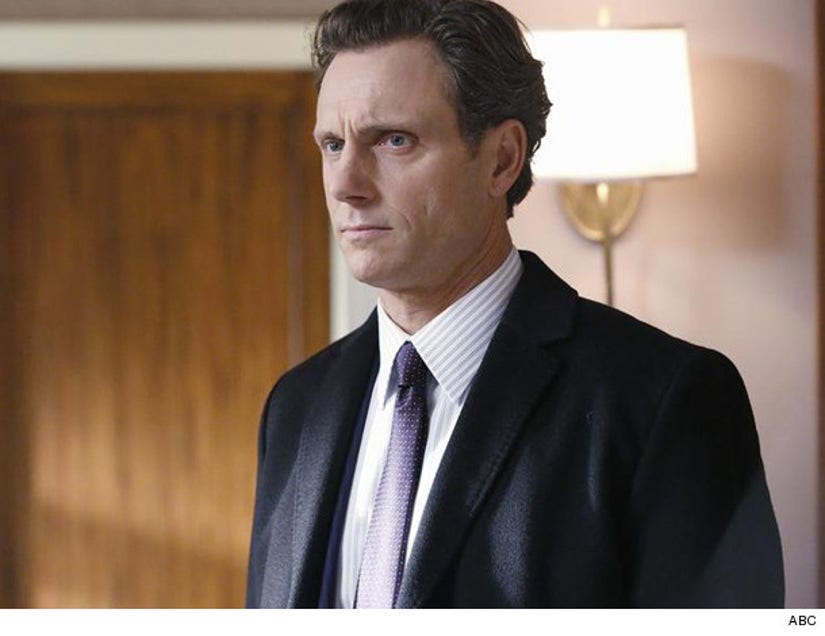 Now moving on to more pressing matters. Everything is already wrong in Fitz' camp.

Olivia Pope is still "missing" and we still don't know who's in charge of her "kidnapping." All we do know is Fitz is the worst. He spent the entire 43 minutes being a Bitch Baby drinking whiskey and giving up on the woman who is supposedly the “love of his life”.

There are lots of things that we don't understand.

WHERE DID THESE SECRET SERVICE GUYS COME FROM?!

We don't understand how they can just cruise into the oval and tell Fitz that he is basically not in charge anymore ... that doesn't make any sense!! We're hoping that we are going to find out that someone else is in charge of making the plans, because the VP can't be calling all the shots.

After Fitz is “warned” by the secret service, he decides that he can't possibly do anything to help Olivia and that he's just going to walk around the White House moping.

WHY ISN'T #MELLIEforPREZ written all over the television?

An honest Mellie is the best version of the Mellies that we know. Finally, when she gets down with Fitz's gettin' down and is all up front about it, she gets the verbal bitch slap of the century from Fitz. She is just tryna do her and there ain't nothin' wrong with that. But the real snaps for Mellie are best served when she convinces Fitz of his obvious idiocy. It goes something like this:

MELLIE: “So you're telling me I had to go all psycho-crazy over a woman that you're gonna let die. OH HELL NO!”
FITZ: (blank stare, weepy face, frown -- moment of recognition)
MELLIE: “Yeah, go declare war. K ThanksBye.” 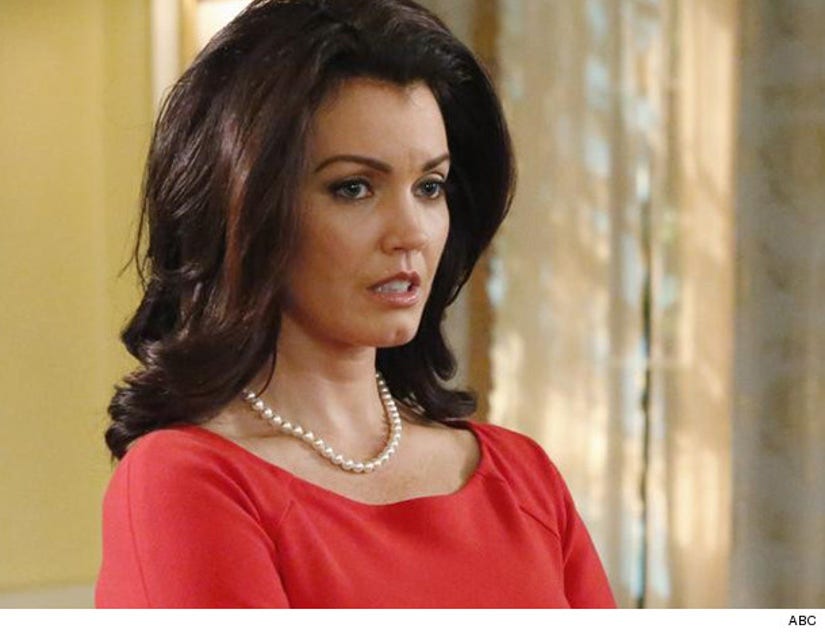 NOT ONLY THAT but then once she realizes that POTUS is, YET AGAIN, hopeless she takes matters into her own hands and uses that infamous Law Degree of hers to get VP Andrew into bed and get Olivia a much needed flat iron. Like we said, Snaps for Miss Mellie. 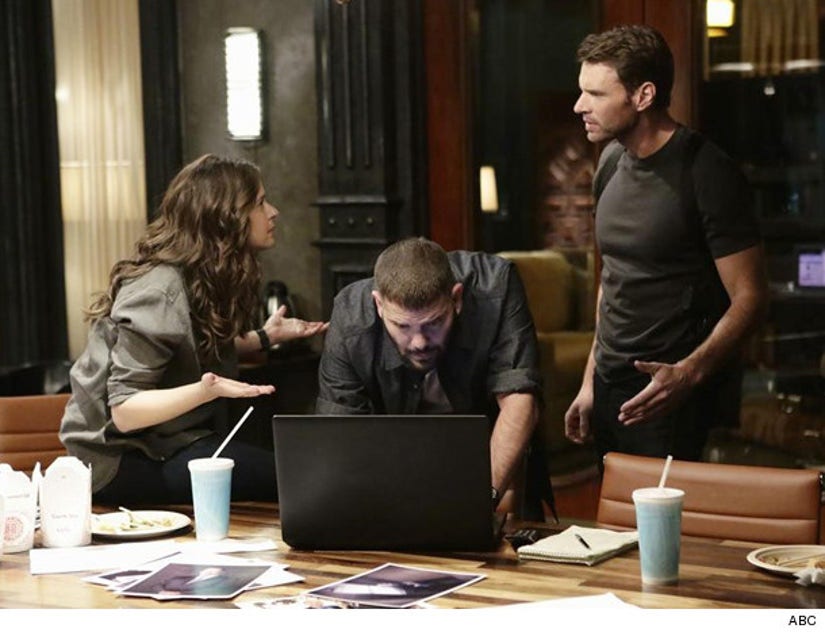 Meanwhile, Quinn and Jake and Huck are actually doing stuff-- Movin' on up to be exact.

They're trying to figure out what is going on with Olivia and using the clues she is dropping as a way to LOOK FOR HER (the opposite of Fitz).

They manage to figure out the guy that kidnapped her and get all his info and his location all in one afternoon.

The group finds Olivia's ring at her neighbor's house and Huck is able to confirm that she was in fact in trouble since she left it behind as a clue...she apparently never takes it off because it's from Fitz (AWWWW--all the feelzzzz). They're so badass and we guess what we've learned here is that LEATHER JACKETS solve all problems. Well...leather jackets and a tool kit. With drills. Lots and lots of drills. [insert creepy face of Huck with bug eyes] Yeah, like that. 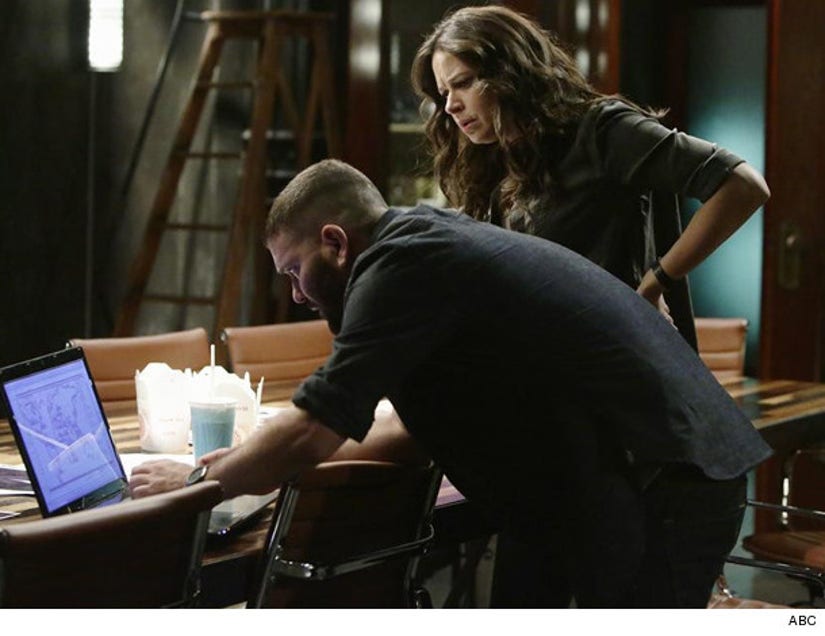 ANYWAY, with David's help they're able to stage a coup de White Hat to go rescue her. Except...

Olivia has decided to save herself. And her kidnapper, Creepy Ian, is creepy touching her while sort of saying that he might hurt her if she's not careful--so she's got to do it fast. She uses a water glass and strategic drinking in order to drop hints to the gladiators about where she is located. Pinkies up if you're ever kidnapped ladies and gentleman.

SO, she tells the kidnapper that she is not going to sit there for 3 years waiting on the war and that she wants to be sold to another criminal. You gotta risk it to get the biscuit. Olivia goes all OP on the kidnapper and shames him into going against his boss-Are you a babysitter or a Boss? (I personally like to say BAWZZ and then smile like I have a grill *shing*)

After he agrees she scores herself a shower, a flat iron (Thank EFFING God) and a fabulous new navy blue coat.

Now that you've gotten our take on the episode, check out the video below to hear our predictions for what's coming up next!

See you next week, Gladiators.