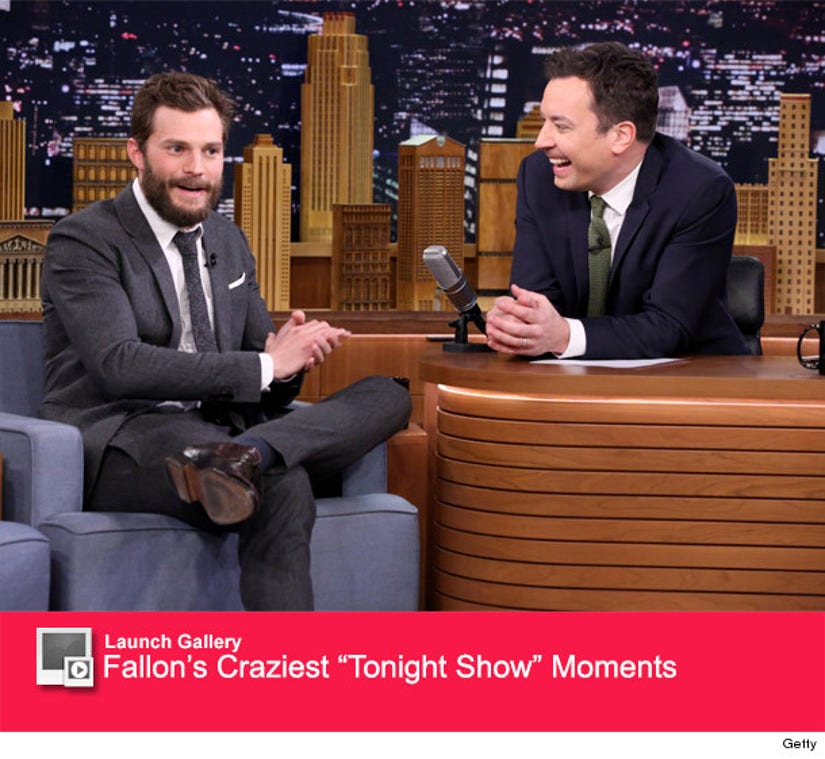 Jamie Dornan may have mastered his American accent by playing Christian Grey in "Fifty Shades of Grey," but can the Northern Irishman do other dialects?

The sexy star put his skills to the test on "The Tonight Show" on Monday, where he took on host Jimmy Fallon in a game called, "Fifty Accents of Grey."

Dornan pushed the button first, and he had to use a Scottish accent. "I don't remember reading about nipple clamps in the Bible," he read. We have to agree with Fallon -- the actor sounded just like Ewan McGregor!

Next up it was Jimmy's turn to read a sexy line in a Russian accent. As you can imagine, things went array from there.

During the interview, Dornan also revealed that he used to live with Oscar nominee Eddie Redmayne. "I've been going [to L.A.] for quite a long time," he said. "Ten years ago, a load of us would come over from my side of the world and try to get work and fail miserably."

The two leading men used to share a house together. "It wasn't really a house," he confessed. "It was sort of a crummy apartment. We were both failing at exactly the same kind of levels."

The 32-year-old hunk said he fell into modeling "in a bizarre kind of way." Eventually, the actor was nicknamed The Golden Torso.

"I have no idea what the means," he admitted. "An editor said that once. He described me as that. But I'm a skinny white Irish guy. 'Golden Torso' sounds like something where you go into a tanning salon and you go, 'Oh, I'll have the Golden Torso.'"

Watch the clip above to hear the rest of the story, and check out his "golden torso" in the "Fifty Shades" sneak peek below!