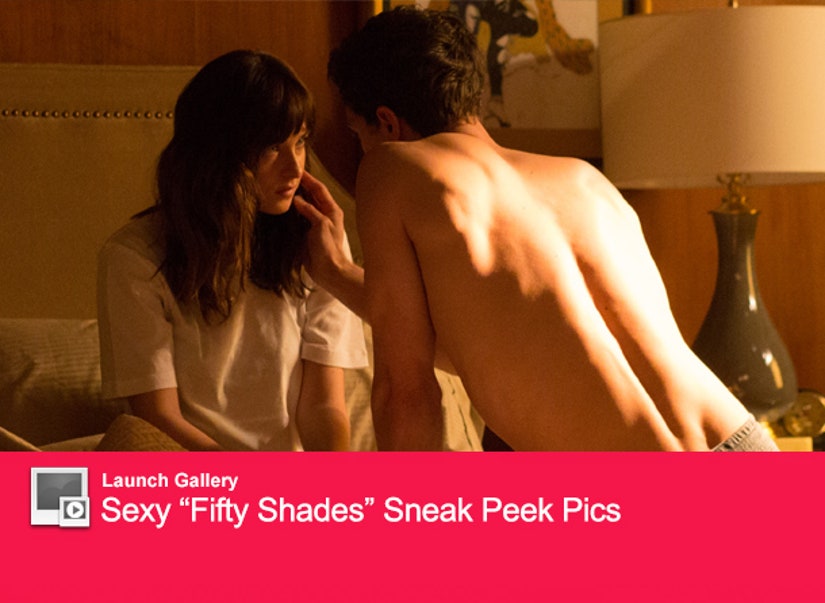 With a film like "Fifty Shades of Grey," it's almost impossible to live up to expectations.

E.L. James' bondage-packed trilogy started out as "Twilight" fanfic, but morphed into an S&M bestseller that left housewives all over America flushed as they read about Anastasia Steele and her "very own Christian Grey-flavored popsicle."

So ... did it pay off? Like Ana after her first spanking, we were pleasantly surprised.

The film is by no-means perfect, but it's still better than it has any right to be. "Fifty Shades" has more sex than your standard studio fare, crisp cinematography and an impressive soundtrack boasting Annie Lennox and Beyonce.

As Anastasia Steele, the college student who becomes the obsession of an incredibly hot, S&M-loving billionaire, Dakota Johnson steals the picture. Though she bites her lip a little too often, Johnson still manages to pull off Ana's innocence ... and conveys her character's inner-struggle over signing on to be Christian's "submissive."

As for Mr. Grey himself, Jamie Dornan does a serviceable job, but would benefit from just a little more charisma. While the character is written as cold and controlling in the books, it's different seeing it in action. At points, Christian crosses over into creepy stalker territory, showing up at Ana's place of employment, buying her a new computer, a new car and popping up unannounced. Throw in the fact that he likes to inflict pain on women, and we see shades of Dornan's serial killer role on "The Fall" all over the place.

And while we see every inch of Johnson -- her bare breasts and pubic hair get a ton of screen time -- the same can't be said for Dornan. Save for one shot of his booty and a glimpse at his pubic area, Jamie spends most of the movie shirtless, sporting the lowest-riding pair of blue jeans ever filmed. It's just cruel how he teases us!

That brings us to the biggest question of all though: How's the sex?!?

There are moments of real heat between Ana and Christian. There's one scene involving an ice cube that is one of the hottest we've seen in a long time. That being said, this soft-core film obviously never reaches the heights of kink found in the book.

Ana never gets a taste of that "popsicle" she can't get enough of, there are no silver balls placed anywhere titillating and that tampon scene, well, it's never even alluded to. Instead, we get some riding crop action, whips and a whole lot of red rope. This is clearly a studio decision, made to keep the film's rating at a strong R ... not the dreaded NC-17.

The film is also sure to spark some controversy when it comes to the sexual appetites of our two leads. While Ana always gives consent for every rough sex scenario she gets herself into, there are moments where she's clearly not enjoying herself ... and that's a real problem. There's one scene in particular that's especially troubling, as we get a closeup of Anastasia's crying eyes while Christian does his thing.

That being said, the relationship between the two is portrayed almost exactly as it is in the books ... so, if fans ate that up, they'll likely be OK with it here too.

Supporting performances from Eloise Mumford and Marcia Gay Harden are welcome additions ... and hopefully expanded upon in the future films. And trust us, there will be future films.

The final line: This may not be the boinkfest everyone wanted, but it's still better than the trashy books deserve.