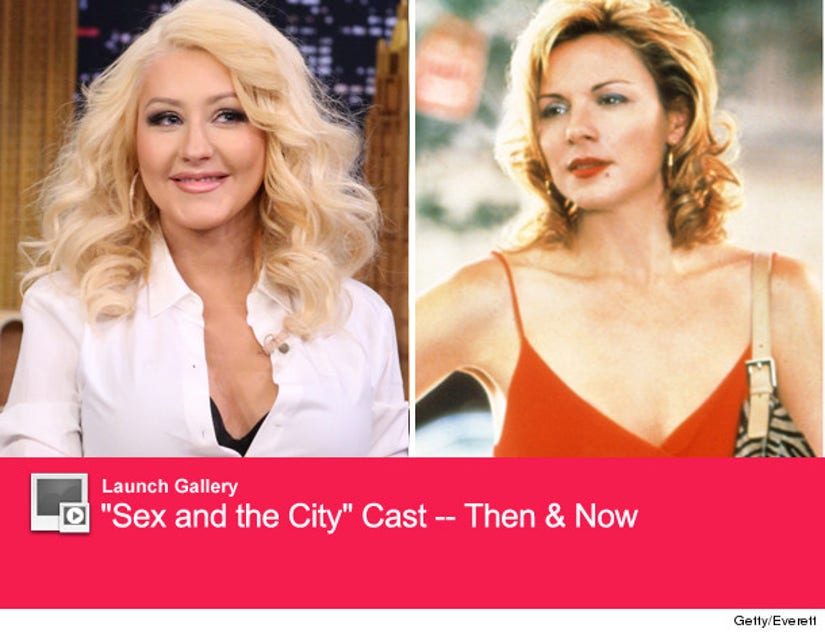 Looks like Britney Spears isn't the only impression Christina Aguilera has mastered!

During an appearance on "Late Show" on Wednesday, "The Voice" coach brought back a "Sex and the City" bit she first did while hosting "Saturday Night Live" back in 2004.

"You did an incredible Kim Cattrall in Sex and the City," host Seth Meyers. "It was one that, at the table, I would call a gasp moment, where everybody's like, 'Oh, [expletive]!"

"It was fun," Xtina replied with a laugh. "I was obsessed with that show at the time...Kim was always talking like this [changes her voice]—and the big line of that [SNL] skit, like her big secret coming out was, 'I'm a dude!'"

Check out the hilarious videos above and below to see her transform into Samantha!

Sex and the City Parody (Christina Aguilera) by Tracey_Searcy

The singer also talked about her upcoming role of "Nashville," revealing that she has a girl crush on Miranda Lambert.

The mother-of-two is hoping her new connection to Nashville and her friendship with Blake Shelton's wife will "give [her] some pull" with aspiring country artists on the NBC singing series.

"I'll have something under my belt to get certain steals for these country artists," she said. "I"ll be like I'm actually on the show 'Nashville,' recording in Nashville..."

Watch the video to see why she thinks Blake keeps winning "The Voice!"