The President of the United States appeared on "Jimmy Kimmel Live!" on Thursday, where he agreed to read his most brutal "Mean Tweets" -- just like celebs including Katy Perry, Britney Spears, Selena Gomez, Sofia Vergara and many more!

"Online, people who already don't like the President are criticizing him for coming here. President Bush would get the same thing when he did TV shows. It's the nature of the job, I guess, especially now when we have Twitter," Jimmy Kimmel told the audience.

"I think it's important to remember that presidents are people, too, and from time to time we give celebrities the chance to read some of the mean things people tweet about them," he added. "Tonight, we extended that same courtesy to our commander-in-chief."

POTUS started the segment by reading a tweet from @carold501: "Obama's hair is looking grayer these days. Can't imagine why since he doesn't seem to be one bit worried about all that's going on."

Another Twitter user wrote, "How do you make Obama's eyes light up? Shine a flashlight in his ears." Obama laughed at that joke, saying, "That's pretty good." @theautho tweeted, "Somebody send obama some lifehacks on how to be a good president. haha. like, i bet that would help. lol."

Kimmel walked on set wearing unflattering jeans. "Jimmy, I think they've got a point," Obama admitted. "I have to say, though, those weren't that mean," he said. "I've got to tell you, you should see the ones the Senate sends about me."

Gotta love Obama for being a good sport!

As the President was hitting the late night circuit, his wife was getting down on "The Ellen DeGeneres Show!"

In honor of the fifth anniversary of Michelle Obama's "Let's Move!" campaign, FLOTUS showed off her moves with the daytime talk show host in a choreographed dance to Mark Ronson and Bruno Mars' hit, "Uptown Funk." 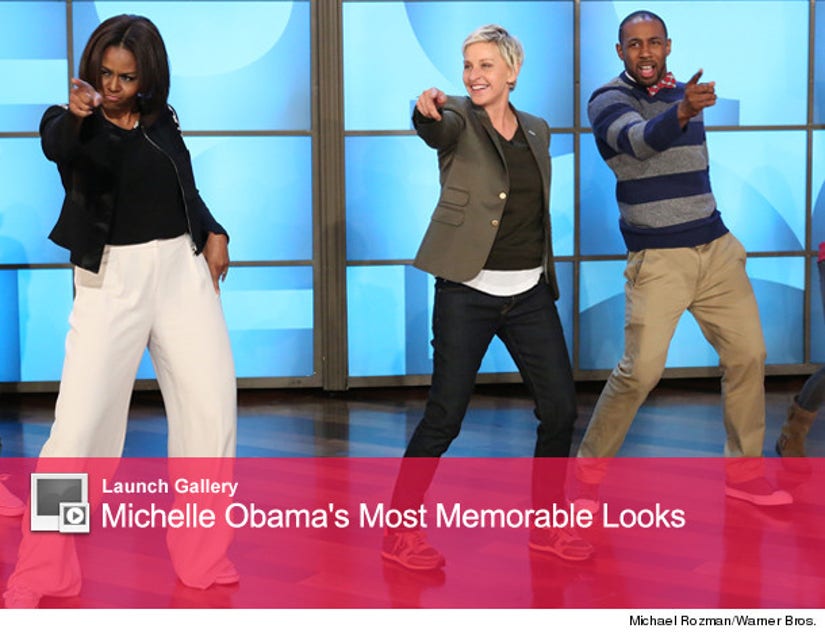 "We're asking folks all across the country to #GimmeFive ways their leading a healthy life. We've got a lot of celebrities involved," she said, thanking Beyonce, Nick Jonas and Ryan Seacrest for their involvement. "We're gonna take over the Easter Egg Roll this year with a #GimmeFive dance, and actually the 'So You Think You Can Dance' all stars are coming to the Easter Egg Roll to teach the whole South Lawn this dance."

To see Ellen and Michelle's hip thrusting, watch the video above now!