The tears were flowing tonight for the New Directions.

After six seasons of ups and downs, "Glee" came to an end on Friday night with an emotional two-hour episode that poked fun at the series' past, honored the late Cory Monteith and made us hopeful for our favorite characters as we learned where their lives will take them.

The first hour gave us some missing backstory leading up to the events of the pilot, showing us why Kurt, Rachel, Mercedes, Tina and Artie all tried out for Mr. Schuester. We finally got to see Artie's audition (Ginuwine's "Pony," naturally), a missed connection between Kurt and Blaine and a near-ousting of Finn Hudson.

But there was one moment that hit us in the gut: The first hour ending the same way as the pilot, reusing the original footage of the now-famous "Don't Stop Believin'" number. Seeing Cory Monteith looking happy, healthy and filling the stage with heart definitely brought on a few misty eyes. 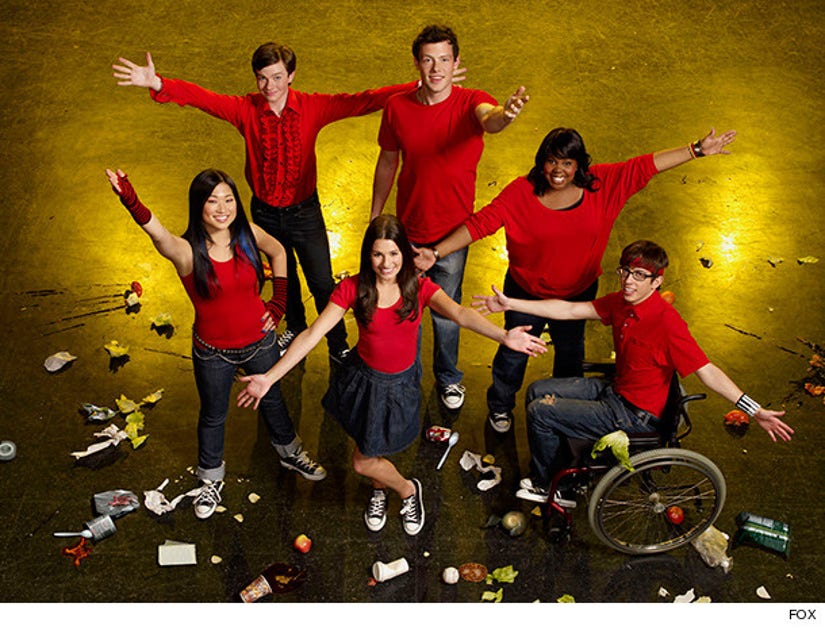 While creator Ryan Murphy originally envisioned the series finale ending with Rachel returning to Lima and walking into the glee club, now coached by Finn. Her saying the words "I'm home" were supposed to end the episode.

With Monteith's death in 2013, that wasn't going to happen ... but how it actually played out was still pretty fulfilling.

The New Directions won Nationals and McKinley was then turned into a performing arts school. Will became principal and Sam took on his role as head of one of many glee clubs at the school. 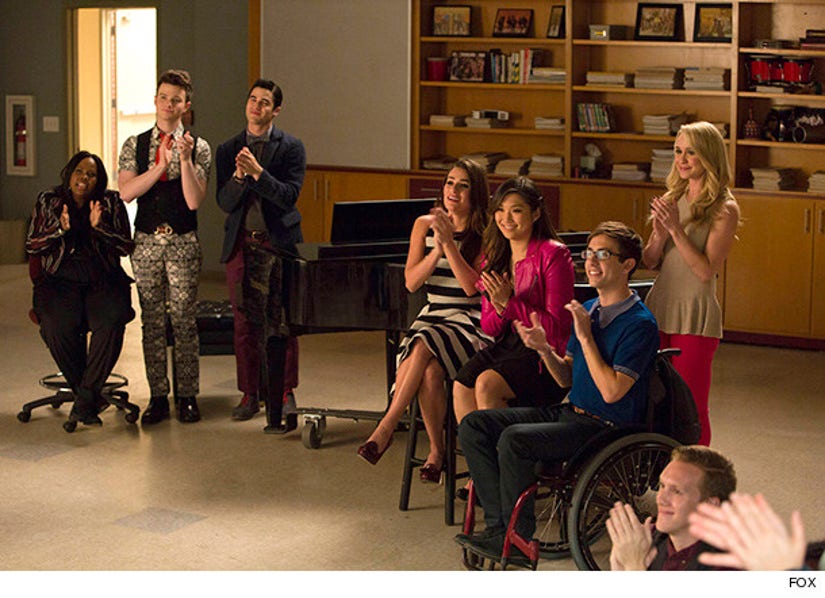 Will said his farewell to his kids and old position by singing Crosby, Stills, Nash & Young's "Teach Your Children" -- and you could tell the tears streaming down Lea Michele and Jenna Ushkowitz's cheeks were the real deal.

It was then time for Mercedes to say goodbye, announcing that she's going to be the new opening act on Beyonce's world tour. She thanked her friends for helping her get her confidence and sings her way out the door by blowing the roof off with "Someday We'll Be Together." Cue Artie: "Mercedes Jones Has Left the Building."

Sue showed up at McKinley to thank Kurt for opening her eyes to the intense bullying she'd always been blind to, then conceded to Will with a performance of ABBA's "The Winner Takes It All."

Then, it was time to cut to the flash-forwards ... 5 YEARS LATER!

- Sue is Vice President, Becky is her bodyguard and she reveals she plans to run for President in 2024.

- Blaine and Kurt are still happily married and are apparently Broadway stars, having done the first LBGTG version of "Who's Afraid of Virginia Woolf?" at Lincoln Center. Blaine's lightened up on the hair gel and both of them are seen performing "Daydream Believer" for a group of children at the Harvey Milk School. It's adorable.

- After a very emotional performance of Darren Criss' "This Time" inside McKinley High, we learn what Rachel's been up to ... and man, it's a lot. She's married to Jesse St. James and is pregnant ... but not with his kid. She agreed to be a surrogate for Blaine and Kurt. Again, cue tears.

We quickly learn Tina and Artie are together, he directed a film she's starring in and it's going to Slamdance.

Rachel and Jesse then head to the Tony Awards, where she's up for Best Actress for a show called "Jane Austen Sings." Despite competition from Maggie Smith, Anne Hathaway and Willow Smith (in "Cabaret"), Rachel wins. 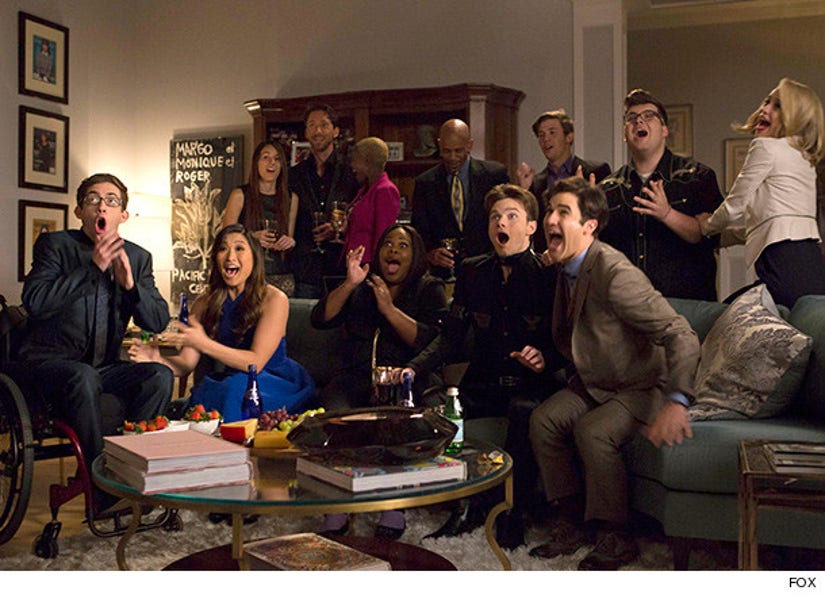 After thanking her husband, dads, Carmen Tibideaux and her friends at McKinley High, she gives special mention to Mr. Schue. "I want to dedicate this award to the person who's responsible for getting me on this stage tonight. He picked me up when i was in a million pieces," she says, adding that he reminded her "Something is special because you are a part of it. Dreams really do come true, so thank you."

Sue, still VP, is seen at a dedication ceremony for the new Finn Hudson Auditorium at McKinley, applauding the New Directions for the bravery it takes to "look around you and see the world not as it is, but as it should be. A world where a quarterback becomes friends with the gay kid. You and your glee club have accomplished something quite remarkable."

That leads to a BIG performance of One Republic's "I Lived," the final number ever on "Glee."

Everyone was back: Quinn, Sugar Motta, all the new New Directions, Mike Chang, that other dancing kid from Season One, Santana, Karofsky, Brittany, Jake, Unique, Ryder and so many more. 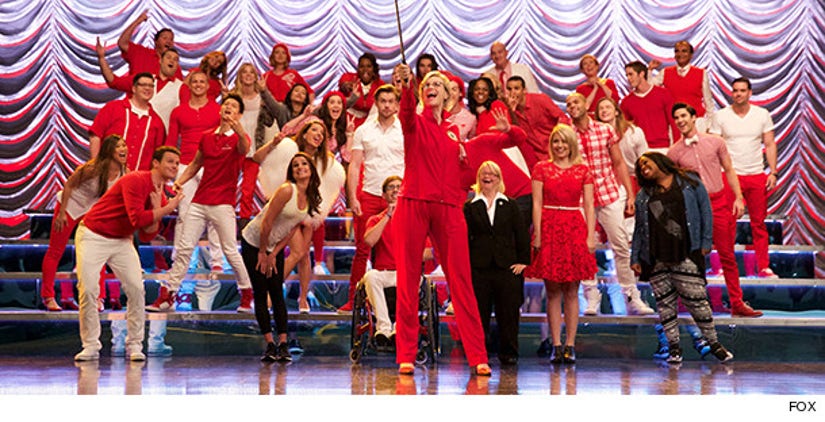 The series ended with a shot of three plaques backstage: One of the original New Directions coach, another of Finn and the quote "The show must go on, all over the place ... or something" and one of our favorite glee club with the words "See the world not as it is, as it should be."

Despite some of the missteps through the years, there's no denying the effect "Glee" has had on pop culture and all the misfits out there (ourselves included) who yearned for a place to fit in. You'll be greatly missed.

What did you think of the finale? Sound off below -- and see the special message Jenna Ushkowitz, aka Tina Cohen-Chang, recorded for all the Gleeks out there!