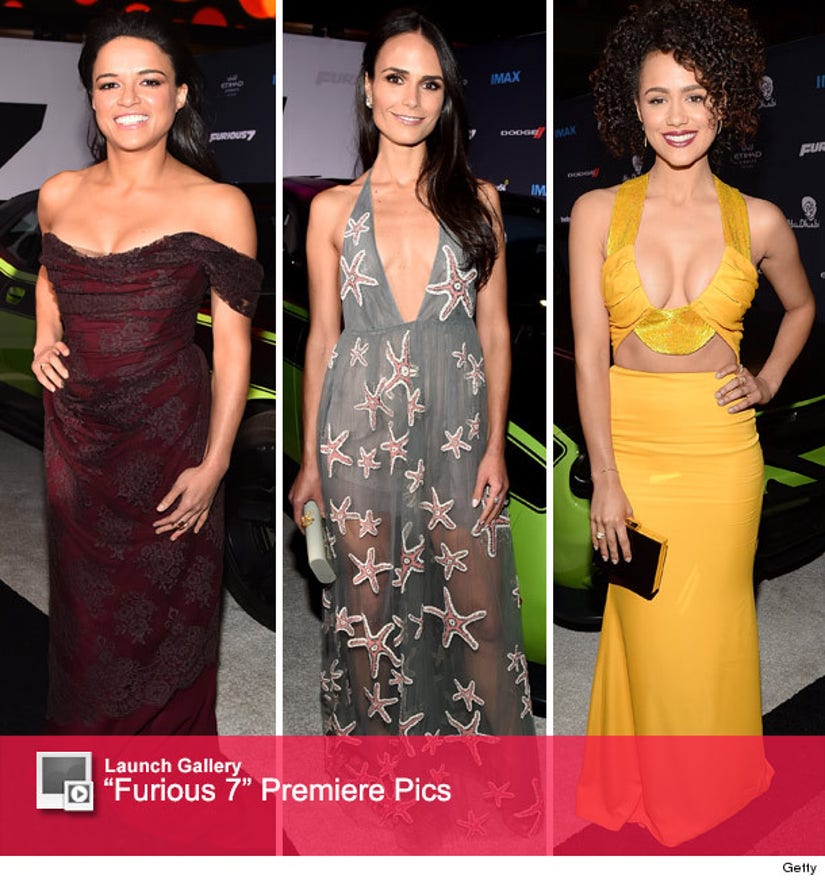 Fast, furious and all out fierce!

The stars of "Furious 7" hit the red carpet in Los Angeles on Wednesday night for the world premiere of the new film, where it was all about the flick's kickass female stars.

M-Rod went full-on glam for the carpet, showing up in a form-fitting, burgundy Vivienne Westwood gown with lace detailing. She wore her hair pulled back and flashed her gorgeous smile for photos. For someone who's known for her tomboy style, Michelle can also turn it out in high fashion when she wants to!

Both Jordana and Nathalie went for low-cut looks. Brewster killed it in a sheer, starfish-covered Valentino dress, while the "Game of Thrones" star flaunted some major cleavage in a yellow Cushnie Et Ochs creation.

And while they all looked hot, we have to take a minute to point out what Kylie Jenner decided to show up in.

The 17-year-old didn't pose for photos on the red carpet -- likely because she was trying to meet up with much older boyfriend Tyga -- but she was still snapped heading into the event. With her long extensions in, the youngest Jenner was seen wearing a satin jacket, extremely short white mini and fishnet heeled boots.

That's a lot of look.

Elsewhere at the premiere, fans were treated to sightings of stars Vin Diesel, The Rock, Tyrese Gibson and Ludacris.

And while they didn't do press, Paul Walker's parents, as well as his brothers Caleb and Cody -- who filled in as body doubles after the actor's death -- were all in attendance.

Before heading into the screening, Cody told PEOPLE that he was "anxious" to see how the final film turned out, adding "It's bittersweet, but I think Paul would be proud."

We loved the film, check out the full review here. "Furious 7" opens tomorrow.