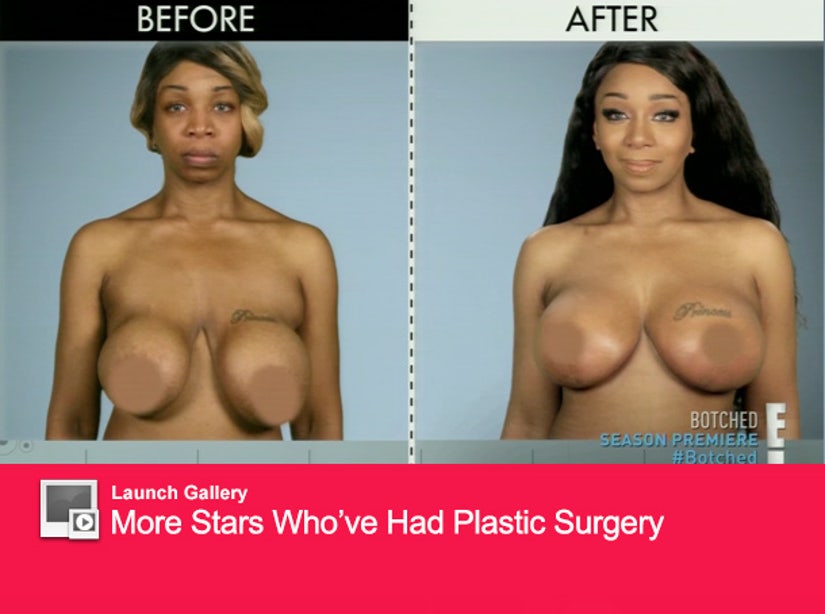 The reality star chatted with RuPaul and doctor Terry Dubrow on the "Botched" after show, "Good Work," on Tuesday ... where she raved about her new boobs and nose.

"You mean my heavenly angel," Tiffany said, addressing Dubrow. "The one that sits from above, that has me sitting this high [grabs breast], even if I wasn't wearing a bra ... that man right there, you have helped me so much."

It's pretty clear that the "Real Housewives of Orange County" star seemed pretty happy with his work too -- he could not stop smiling while the "Flavor of Love" star gushed about her results.

"My nose is running, because it's new," Pollard joked, as she started to tear-up.

Make sure to check out the clip above to see what brunette beauty also said about having sex with her new breasts. TMI alert?!

"When I got my own show [on VH1], I went to Beverly Hills and I consulted with one of the finest doctors and he told me I could go as big as I wanted to go," she admitted in the Season 2 premiere of "Botched."

"I let him go super huge on my cones. When I woke up, I was in so much pain and discomfort," she continued ... adding that her right breast felt "like a bowling ball" while the left was "saggy and disgusting."

The reality TV star also got a nose job to fix her deviated septum.

What do you think about the 33-year-old's results? Tell toofab in the comment section below and check out even more stars' plastic surgery confessions in the gallery below!