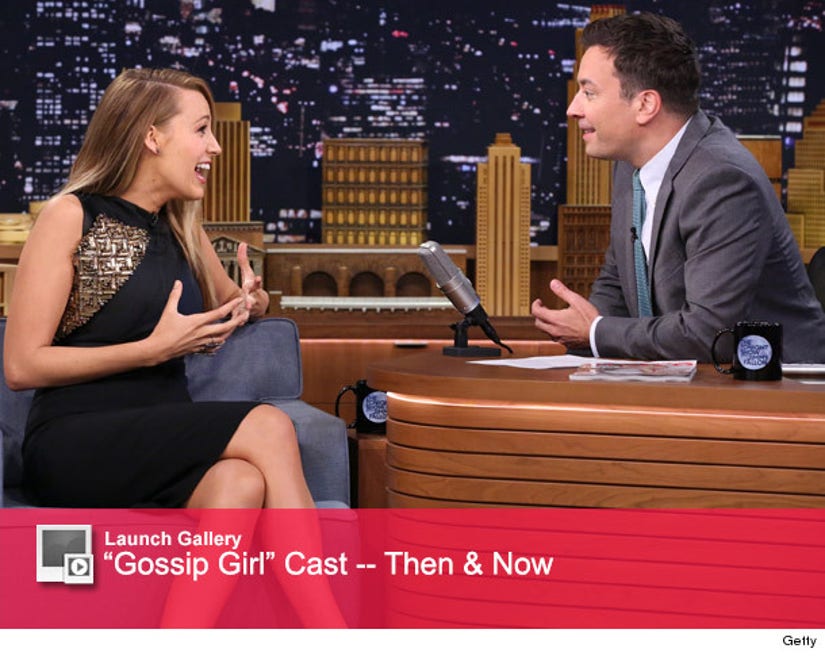 Blake Lively is a good sport!

The actress took a break from her press fashion tour while promoting her new movie "The Age of Adaline", and stopped by the "Tonight Show" on Tuesday to chat with Jimmy Fallon.

The 27-year-old stunned on the late night show in a black mini dress, with gorgeous side swept hair and natural make up. But the blonde beauty was really there to have some fun with the host and play one of his silly games.

"We're about to play a fun silly game that all the kids around the office are playing. It's called 'Say Anything,'" he said of the random game. "Blake and I will take turns saying random words, first person to stumble, blank or repeat a word loses that round."

But this odd game had a catch: "The winner of that round gets to apply a piece of clear tape to the loser's face. We play until someone loses three times, and has three pieces of tape on their face."

Ryan Reynolds' other half stumped the 40-year-old funny man right off the bat with the word "stingy" and proceeded to tape his nose to his head. The "Gossip Girl" alum continued to keep a straight face, while Fallon could not keep it together.

The mom to 4-month-old daughter James, also opened up about her new motherhood status and revealed that her and her actor hubby have been fighting over their baby's first word.

"She has to say 'ma-ma' first, I do everything! He does nothing," she joked.

What do you think of Blake's late night appearance? Sound off below then click "Launch Gallery" for more Gossip Girl stars then and now!