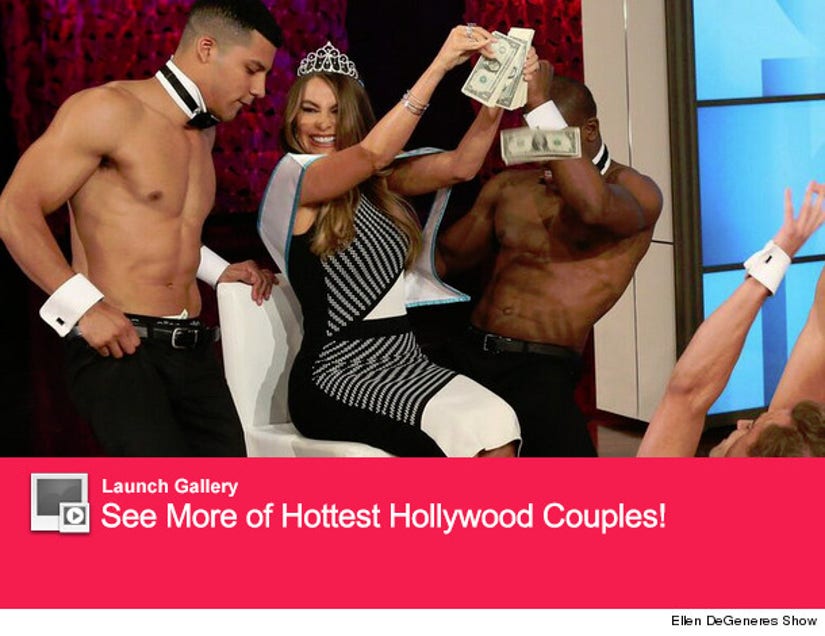 Sofia Vergara gets a striptease!

In honor of her engagement to actor Joe Manganiello, Ellen DeGeneres gives the Colombian beauty a very "Magic Mike" themed surprise on Monday's episode of "The Ellen DeGeneres" show!

In the clip, the comedienne gifts the 42-year-old with a giant cake, but little did the "Modern Family" star know what was in store for her.

"In honor of your engagement I got you a cake," Ellen says in the sneak peek. "A stripper?!" Sofia interrupts.

"You want a stripper?" Ellen laughs, as she pushes Sofia on the stage.

The actress gets startled by one of the shirtless dancers who pops out of the fake cake and soon three guys, dressed like the characters from Joe's shirtless flick, appear on stage and dance around the giggling star.

Sofia loves the surprise and even hands out tips for the dancers from a stack of fresh bills -- check out Vergara's reaction in the clip above!

Earlier in the show the star gets chatty about her husband-to-be ... and it turns out she wasn't even interested when the 38-year-old first asked her out!

"At the beginning I didn't wanted to go out with him," Sofia reveals in the clip. "I had just finished a relationship. He seemed like a lot of work because so handsome, and younger than me, and like so sexy and best bachelor or whatever he was. And I'm like ugh. Just too much! But he convinced me. He flew to New Orleans and forced me on a date."

The two began dating in July 2014 and after six months the "True Blood" star popped the question. The happy couple is now in the process of moving in together.

"He has a lot of books that I don't know where I'm gonna put. He reads everything. It's like a lot of old books, new books," she joked about Joe's clutter.

"But they're driving me crazy because I'm looking for a place to put them. We have a wine cellar and I said oh that's where we should put them instead of wine let's just like put them in the little spaces."

Watch the full video above to see what else Sofia had to say about living with Joe!