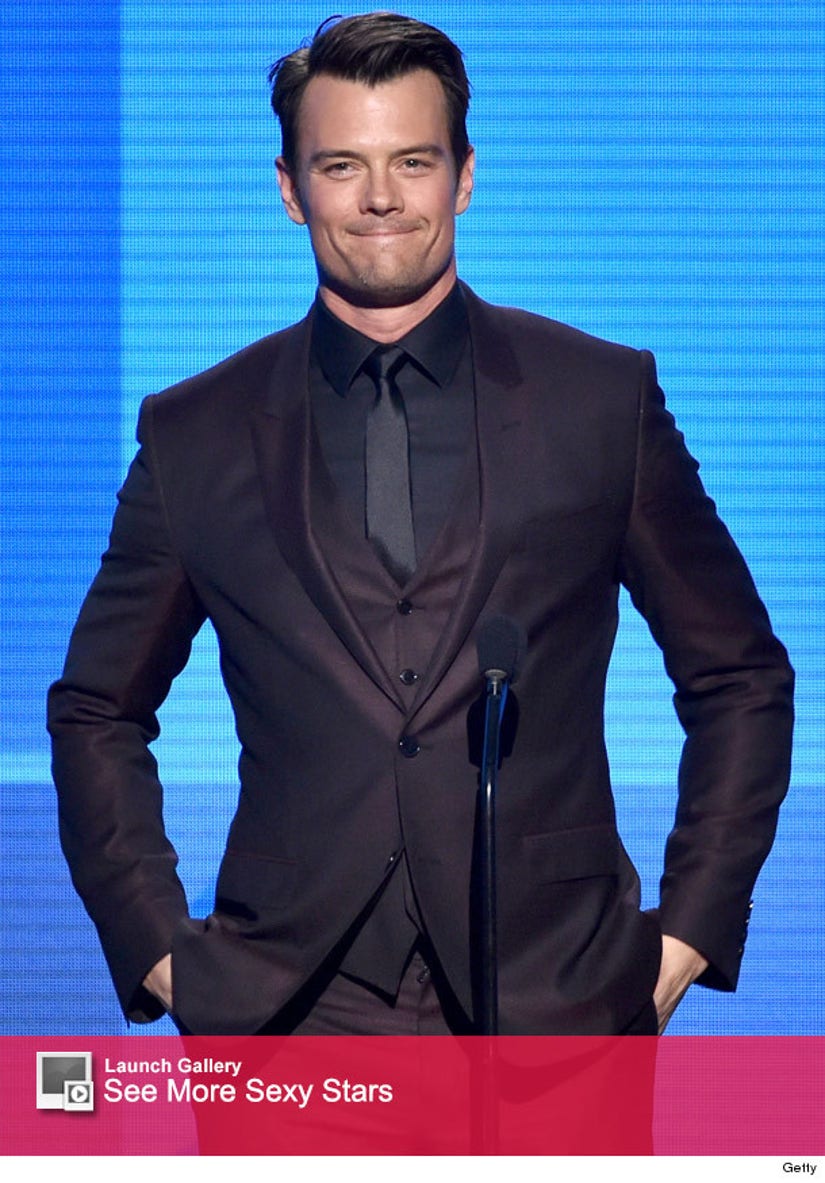 The sexy star chatted with toofab's Brittany Kyles where he opened up about his new flick, "Bravetown," and revealed where he drew his inspiration for the role.

In the movie Duhamel plays a veteran-turned-therapist who helps a hard-partying DJ (Lucas Till) turn his life around after he's sent to live with his estranged father following a brush with the law.

toofab: You play Josh's therapist in Bravetown -- what drew you to the role?

Josh: Well, you know, it was different for me. Typically, I would have been playing the part Lucas Till was playing, that guy who's sort of young and in love and lost and all those things. But this was new for me, and I loved the fact that I'm being seen as something different than just the guy in love, who's confused, growing up and everything else. Now I'm a little bit older and I have had a chance to do some things that are outside what I have done before. So this was an opportunity to do that.

toofab: Your character also served in the military, do you have any close friends or family members who have served?

Josh: Yeah, my Aunt was deployed three separate times to Iraq and Afghanistan. My whole life, since the time I was a kid, she was in the military and moved up the ranks and ultimately became a Lieutenant in the National Guard. She was definitely an inspiration, not just for the time served in the military, but she was also a nurse and now she is a lawyer. She's just an incredible woman.

I met a bunch of guys who talked a lot about post traumatic stress in the "Transformers" movies. Those guys I worked around were actual SEALs, Army rangers or guys who have been deployed and we talked a lot about it. So I obviously tried the best I could to put myself in their shoes, but unless you are there and [have] seen the things that they do, it's really hard to do.

toofab: The movie takes place in North Dakota -- which is where you grew up -- do you prefer big city or small town living?

Josh: Am I more of a small town guy? I guess in some ways, yeah. That will always be part of me. I grew up with a lot of space around me and not a lot of people and it's hard to acclimate to a big city when you have grown up in a small, less populated area. So even in LA, we live in a spot with some open space around us. I lived in New York for three years and as much fun as it was, it starts to feel claustrophobic after awhile. A place like North Dakota gets in your blood, it's like the inverse of growing up in New York City. People that grow up there never really get it out of their system. It's still the same thing when you grow up in a town like Minot, North Dakota.

toofab: EDM is a big focus in the movie, too -- are you a fan of that music?

toofab: Both of the kids in Bravetown come from somewhat of broken homes -- as a parent, how important do you think it is to have both your mother and father in the picture?

Josh: Obviously, you can raise a good contributing citizen to society with just a single parent upbringing. I think there's a lot of reasons why it helps to have two parents involved, whether they are married or not. My parents, for example, were divorced when I was in 4th grade, but they were both present in my life and they were probably better parents apart than they would have been together. I'm not advocating that, especially not in my situation, I want to stay with my wife forever, but I think it helps to have a male figure in your life [and] it helps to have a female figure in your life.

It's hard for me to imagine me not being present in my kid's life. I just couldn't imagine the psychology behind that. It must be such a sad existence to know that you have a kid out there that you don't speak to or interact with and have no involvement raising. It's just beyond me.

toofab: What's the biggest thing you hope people take away from the movie?

Josh: This movie is meant to be fun. At the end of the day, it's a fun sort of story about this kid who is coming of age and learns that despite his upbringing he can contribute and people do care about him and he can care about other people. I think it's moving and I think people will really enjoy it for a lot of different reasons.

You can check out "Bravetown" on iTunes and in select theaters!