The "Grace and Frankie" star stops by "The Ellen DeGeneres Show" on Thursday, where she spills her dirty little secrets in a game of "Never Have I Ever."

"Never have I ever made out with someone half my age," DeGeneres reads. Fonda ... yep!

"Never have I ever hooked up in the bathroom at a party," the comedienne says next. After the 77-year-old says she has, she asks, "What do you think 'hook up' means?"

"A hook up is probably a little more than making out. But not a little. But it could be all kinds of things," Ellen replies. "I stick with that," Jane retorts.

This is when the game gets really steamy -- as the talk show host asks her guest about being a member of the mile high club!

"I was 50 years old. It was my fourth date with Ted Turner. He has his own plane, and we get on the plane, and he said, 'Are you a member of the mile high club?' I didn't know what he was talking about," she says. "And I joined!"

Check out the hilarious clip above to hear if Jane has been "drunk before noon" or "stolen something." 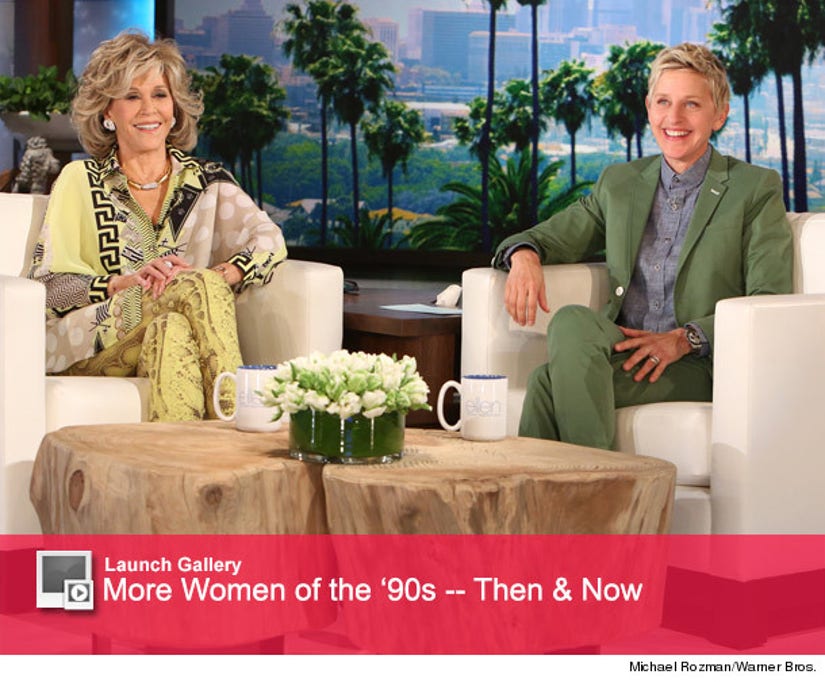 During Thursday's appearance, the Hollywood veteran also talks about her new hit Netflix show, revealing that she had her "first on-screen kiss in 15 years" with costar Craig T. Nelson.

"I left the business for 15 years, and if somebody had told me then that at 77 I would be back at a thing called Netflix. It's not even television! It's like you can look at the whole season all at once in six hours or something like that. And that I would have my first kiss at 77 since 15 years, I would say you're crazy. But it was fun," the Oscar-winning actress says. "The lesson for me is that you just never know what's in store in life. You just never assume. I thought I'd never be back with a career in acting and certainly I'd never have an onscreen kiss, and look what happened!"

Watch the video below to see if there was any tongue involved!