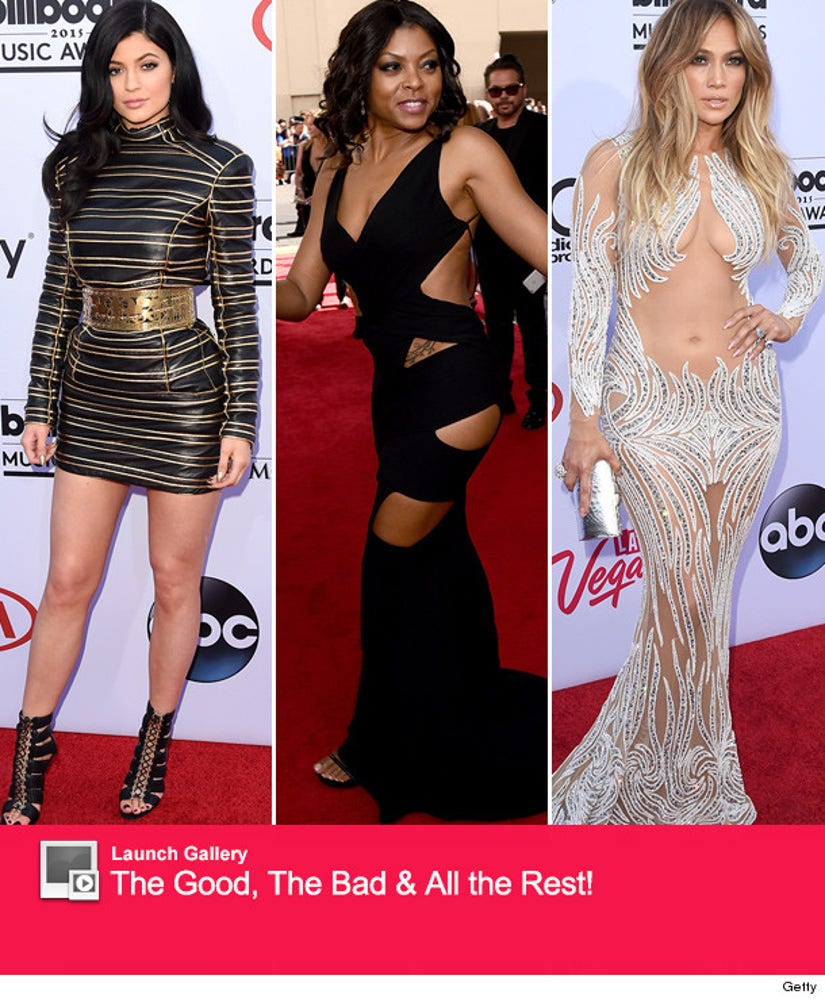 Hosted by Chrissy Teigen and Ludacris, the 2015 Billboard Music Awards featured some killer performances, the debut of Taylor Swift's "Bad Blood" music video and a whole lotta skin on the red carpet.

And with appearances from people like Britney Spears, J.Lo and the Jenner gals (who got booed, see video below), there were definitely some moments you may have missed!

Here are the moments everyone will be talking about Monday morning!

The only one missing: Katy Perry, who the song is reportedly about. Wonder what she thinks of the action-packed clip!

Chrissy Teigen didn't trip when she made her big entrance to the MGM Grand on Sunday night ... but she did manage to take out someone in the audience!

As she walked up to the stage, a random woman in the audience tripped right over Chrissy's gown and went down. The host didn't notice ... and just kept walking.

"For the record i couldn't even see the woman falling behind me -- she stepped on my dress and i was trying not to eat s**t," Chrissy posted on Twitter Monday, adding:

everyone is saying i am some sort of monster for not stopping and giving her CPR or something -- she is fine, was not a big deal.

she should be out of the hospital by christmas

When Taylor Swift picked up the trophy for Top Billboard 200 Album, she gave hugs and kisses to everyone in her entourage -- including boyfriend Calvin Harris.

There was definitely something intimate about this one, which doesn't come as much of a surprise since the two were seen holding hands just last week.

While Zayn Malik dropped out of the band, it's nice to see the other guys of One Direction are still really close.

When the boys picked up their trophy for Best Group, Harry was seen grabbing a hold of Niall Horan's man bits.

He was definitely as surprised as we were!

Britney and Iggy had their debut "live" performance of their new single, "Pretty Girls" -- and while Spears looked amazing and pulled off some classic Brit Brit dance moves, there's no way her vocals were live.

But can we talk about her body?! Damn, her Las Vegas show is really keeping her in some incredible shape. It's the best she's looked in years.

5.) Mimi Goes for the High Note

After a bout with laryngitis and missing rehearsals for tonight's performance, all eyes were on Mariah Carey as she sang a medley during the show.

While her register isn't nearly as impressive as it once was, she really went for the high note at the end of her new song "Infinity."

He couldn't be there to accept his award for Top Male Artist, as he's recovering from vocal chord surgery -- but he made a hilarious video to thank his fans.

Without saying a word, he gave shout-outs to his supporters, Taylor Swift, Nicki Minaj and Ed Sheeran using cue cards.

7.) "The Breakfast Club" Gains a Member

Molly Ringwald introduced Simple Minds for a 30th anniversary performance of "Don't You Forget About Me" from the 1985 film "The Breakfast Club."

During her speech, she asked Taylor Swift if she could be in her "club" now -- and Swift accepted!

The two were seen rocking out together in the audience (and so was J.Lo), and it even looked like they were exchanging phone numbers after the performance. Maybe Molly will be in her next music video ...

8.) And Last, But Not Least, Were the Jenners BOOED?

When Kylie and Kendall Jenner introduced brother-in-law Kanye West's final performance of the night, the audience got rowdy -- and it sure sounds like they were being booed.

Take a listen in the clip above, what do you think?

For more, check out some killer couture in the red carpet video below!