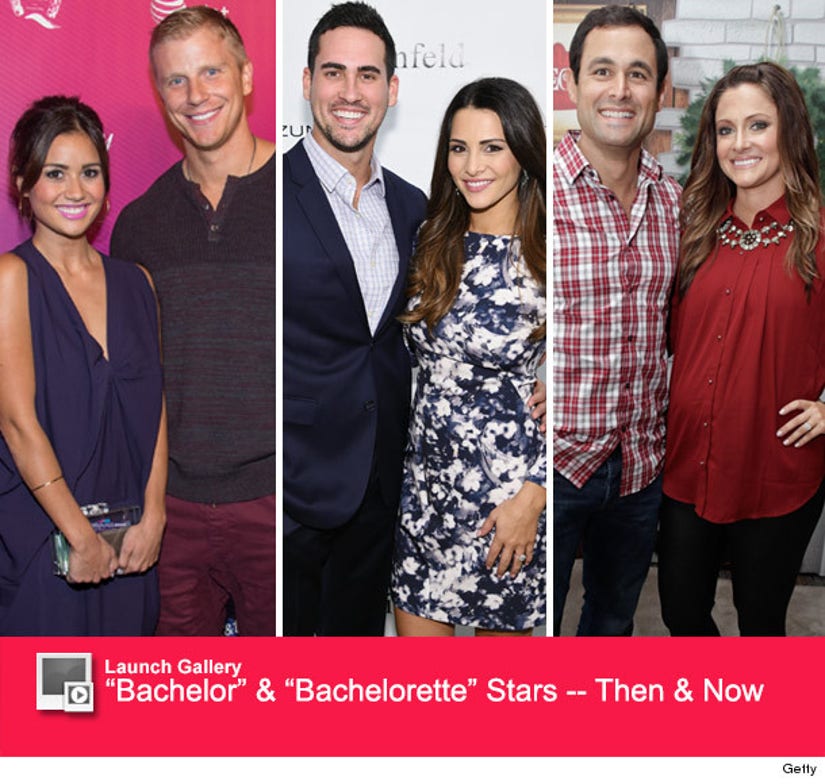 After the final rose is handed out and the cameras stop rolling, the relationships between "The "Bachelor" and "The Bachelorette" couples either flourish or fade.

As we gear up to watch Britt Nilsson and Kaitlyn Bristowe's quest to find love on the upcoming season of "The Bachelorette," toofab is taking a look back at the pairs who stuck together, those who split and the few who said "I Do" after their romantic proposals.

Trista Rehn and Ryan Sutter are one of four couples who tied the knot after meeting on the ABC reality show. Trista was the first woman to be a "Bachelorette" after appearing on the first season of "The Bachelor." She surprised audiences by picking Ryan at the end and their television wedding aired in December 2003.

Ashley Hebert and JP Rosenbaum got hitched in December 2012 after she picked him during the show's seventh season.

Sean Lowe met his match, Catherine Lowe, during season 17, and the two said "I Do" in a live television special in January 2014. Sean's ex, Desiree Hartsock, recently married her season 9 pick, Chris Siegfried.

Another memorable "Bachelor" couple is Jason Mesnick and wife Molly Malaney. The Bachelor originally gave his final rose to Melissa Rycroft, but later changed his mind, and professed his love to Molly. They tied the knot in 2010 and now have a daughter.

While these duos found their happily-ever-after after reality TV, most of the other couples haven't been able to stick together off screen.

We had high hopes for Andi Dorfman and Josh Murray, as well as Courtney Robertson and Ben Flajnik, but, it seems, their romances fizzled out.

Check out the gallery above to see where all of your favorite "Bachelor" and "Bachelorette" contestants are now ... and if they're still looking for love!